Noah Gray-Cabey is the American film and television actor who plays the role of Micah Sanders. He also portrayed a shape shifted Sylar in the episode I Am Sylar.

Noah has performed in the television series CSI: Miami, My Wife and Kids, and Grey's Anatomy. He has also appeared in the 2006 film Lady in the Water. Noah appears in the 2010 film Pizza Man, also starring David H. Lawrence XVII and Leonard Roberts, and co-produced by Foz McDermott. 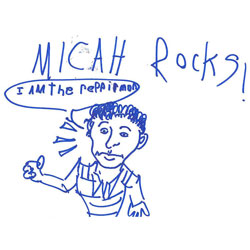 Noah "The Repairman" Gray-Cabey drew this picture of his character in order to raise money for the Pediatric Epilepsy Project.
Retrieved from "https://heroeswiki.ddns.net/index.php?title=Noah_Gray-Cabey&oldid=100198"
Categories: