Greg Grunberg is the American film and television actor who portrays Matt Parkman, as well as Sylar in the episode Strange Attractors.

A veteran of a number of successful television series, Greg Grunberg has starred in numerous series including Alias and Felicity. He can also be seen in the films Mission Impossible III and Malibu's Most Wanted. Following Heroes, Greg landed a recurring role on the shows Love Bites and The Flash. He also had cameo roles in such projects as Star Wars: The Force Awakens, Star Trek, Super 8, Hawaii Five-0, the animated Ultimate Spider-Man, and Psych (where he played a director who couldn't think of any big hits that ever aired on NBC). Greg has also found success doing voicework for video games such as Gears of War 3, L.A. Noire, Halo: Reach, TimeShift, and Condemned: Criminal Origins. 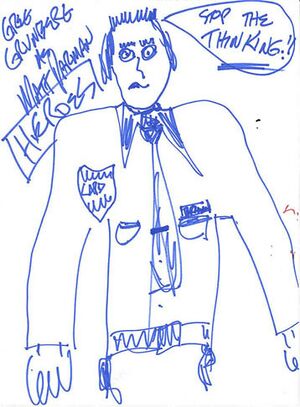 Greg Grunberg drew this picture of his character in order to raise money for his favorite charity, Pediatric Epilepsy Project.