Leonard Roberts is the American film and television actor who plays D.L. Hawkins.

Leonard graduated from the Depaul University's Theater School (located in Chicago, IL) with a Bachelor of Fine Arts in acting. His previous works include appearances on the popular Buffy the Vampire Slayer, Providence, and Drumline. After Heroes, Leonard was involved in such works as Private Practice, ER, Bones, F*ck You Pay Me!, The Stone House, Castle, and Marvel's Agent Carter.

Leonard appeared with Lisa Lackey in CSI: Miami, with Zachary Quinto in 24, with Jesse Corti in Providence, with Richard Roundtree in Joe and Max, with Karri Turner in JAG, with Rick Scarry in Buffy the Vampire Slayer, with Clay Wilcox in The '60s, with Yareli Arizmendi in Threat Matrix, with Matthew John Armstrong and Ashley Crow in Turks, with Dominic Testa in Hoodlum, and with Stana Katic in Castle. Leonard appeared in the Geffen Playhouse's production of the musical Atlanta, which was written and co-directed by Adrian Pasdar. Roberts appears in the 2010 Foz McDermott-produced film Pizza Man along with Noah Gray-Cabey and David H. Lawrence XVII. 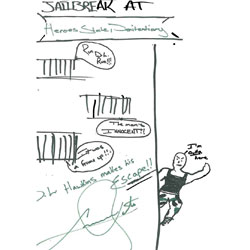 Leonard Roberts drew this picture of his character in order to raise money for the Pediatric Epilepsy Project.
Retrieved from "https://heroeswiki.ddns.net/index.php?title=Leonard_Roberts&oldid=74176"
Categories: