Micah Sanders is the son of Niki Sanders and D.L. Hawkins. Micah is gifted with extraordinary intelligence, and cares very much for his deceased parents. Having a strong moral compass (though he has occasionally made less-than-moral choices), Micah believes there is a clear division between right and wrong. To this end, Micah (under the alias of REBEL), coupled with his own sense of morality and his ability, has set about contacting, warning, advising and leading evolved human fugitives all over the world. With the help of Leona Mills, he created an underground railroad for evolved human fugitives for them to escape being hunted down and captured by the Department of Homeland Security. The underground railroad is known as "Ellen", and is operated by LAWR and at least one other team under his leadership. He began it because of the capture of his family. After the revelation of evolved humans, Micah became known as Hero Truther, a mysterious figure spreading the truth about evos. He was eventually captured by Renautas agents and used to spread disinformation before being rescued by Carlos Gutierrez at which point he spread the truth about the June 13th bombing and set out to help stop the H.E.L.E. He is an evolved human with the ability to control and manipulate technology.

For an episode-by-episode summary, see Micah Sanders: Season One History.

Micah repairs his computer when his mother tells him to get his things and to leave with her. They go to his school so his mother can talk to his principal. When they leave, Niki drops him off at Tina's house where Micah waits a long time for her return. When Niki finally picks him up, she takes him home before taking him to the desert and eventually to his grandmother's house. He tells his mother he believes his father is innocent. Back at Tina's he reveals to Niki that he knows how she makes a living, and prefers it over what she is about to do. 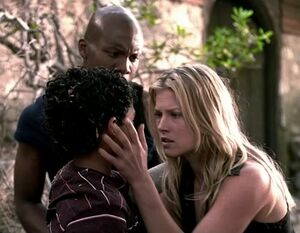 When the two return home, D.L. arrives and fights with Jessica, taking Micah after he knocks her out. Driving away, the two meet Hiro and Ando while saving a woman. That night, Micah uses a broken payphone to call his mother, instead getting Jessica, until D.L. stops him. Micah persists that they should go back for Niki, but D.L. initially refuses until Micah tells him about Jessica. However, Jessica is already present and shots at D.L. who phases to survive. After Jessica hurts Micah, Niki regains control and turns herself in to the police.

Micah then begins living with his father. Soon, he visits Niki in jail and later takes money from an ATM for his father. Niki is soon released and the family is finally reunited.

However, soon a woman poses as his mother introducing him to Linderman, who wants Micah's help. Micah leaves with Linderman. He soon realizes that someone is impersonating his mother, and tries to escape. However, Candice uses her power to keep him confined. The next day, she uses him to cause Nathan Petrelli to win in the election. Micah complies and then is taken back to the room by Candice. A day later, Niki comes to his rescue and the two go find D.L. who is hurt near Mohinder and Molly. He uses his ability to activate a broken elevator allowing them to escape to Kirby Plaza where they witness the showdown, and finally the explosion. Two days later he chats with Hana about D.L.'s condition. 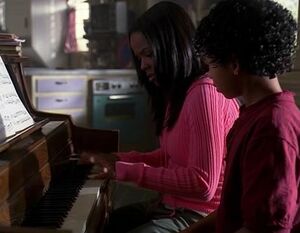 Niki and Micah leave Las Vegas, where Niki brings Micah to live in New Orleans. Niki tells him not to use his powers, and that while she has to leave one more time, when she gets back, they'll be together. Niki and Micah approach a house and meet Nana. Micah has some troubles with his cousin Damon, who wants to watch a wresting match on pay-per-view. Micah uses his ability to gain access to pay-per-view, so Damon can watch the wrestling. Monica enters, and begins to get angry, but Damon tells her that Micah is a genius and rigged the cable. Micah apologizes, and Monica reminds him that his mother asked her to look after him.

Later, Micah finds that Monica plays the piano very fast, though she only saw Micah playing the same notes for a few minutes. Micah tells her he thinks he knows what happened with the piano. He goes to the television and puts his hand on it, and it turns on and off, explaining how he rigged the pay-per-view. He tells her he thinks it runs in the family, since D.L. could walk through walls, and his mother is also special. He shows her a 9th Wonders!, and points out St. Joan, the muscle mimic who can do whatever she sees. Micah tells her that maybe they should test it out, and after duplicating double-dutch and kung-fu, the two keep their abilities a secret. 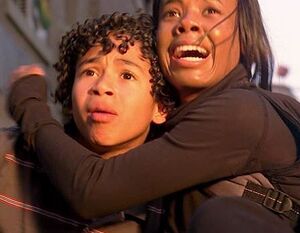 Micah sees his mother, Niki, for the first time since coming to New Orleans. Niki explains that she has a virus, but that is it not contagious and that Doctor Suresh is doing everything he can to find a cure for her. Micah decides to give her something that will give her hope, his deceased father D.L.'s medal, and goes to find his backpack only to find it is gone. Damon explains to Micah that it was stolen. Micah is approached late at night by Monica who says she will get the backpack. Monica and Micah sneak out to the house where Micah's backpack is, then Monica breaks in and finds the backpack. However, the house is broken into and they find Monica, throwing her into the back of a van. Scared, Micah runs, leaving her there with them. Micah tells Niki that Monica has been captured by a street gang. They leave to go help her. They follow a GPS signal emitted by Monica's cell phone to find her location at a burning warehouse. Niki helps Monica escape with Micah's backpack, but Micah and Monica watch the building explode with Niki still inside.

Tracy Strauss goes to New Orleans to search for Niki Sanders. She finds Niki's funeral, and when she tries to leave she is approached by Micah. Micah mistakes her for his mother but quickly realizes that she is not. He takes her to his room and Tracy explains that she does not know why she and Niki look so much alike. Micah asks her if she is "special" and Tracy refuses to answer. Micah reveals his mother's power and his own, before getting Tracy the information he needs.

Two months later, he communicates with Monica, who has become St. Joan, a vigilante. Micah helps her evade the police and overhears her capture at the hands of government agents. Micah returns home and finds that the entire Dawson family has been captured. He tracks them to a plane and then finds the crash site. He comes across Sparrow Redhouse, who he connects with. He and Sparrow are attacked by some government agents and narrowly escape capture. At a bus stop, Sparrow promises to help Micah. After finding a base of operations, Micah communicates with Sparrow and West and gets them to fly to London, to save a family that is under attack. They return with Abigail, and the Rebel team is formed. Micah leads a breakout from the Building 26 compound, overseeing his team as they bust out Nana and Damon. Before he can join them, he is captured by Thompson Jr., who demands his help in locating Sabine Hazel. Micah tricks him and alerts his team, who rescue him. 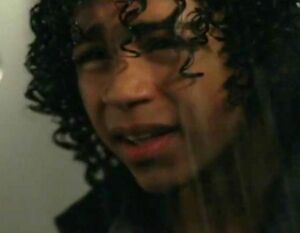 Micah then frees Tracy from Building 26 and attempts to escape Washington with her. When Danko's men catch up with them, Micah learns that Tracy is nothing like Niki. Tracy makes up for hurting Micah, giving her life to ensure his safety. The Rebel team heads to India to get Molly Walker. Micah begs Molly for her help and they infiltrate a train loaded with prisoners. Micah and Abigail are captured and then released following a train crash. After learning where Monica is, Micah leads his team to an abandoned hospital but is sidetracked before he can reunite with Monica. He comes face-to-face with Sylar, who he manages to convince to help him. Sylar fools Danko and Micah sleeps at his apartment. When he sees that Sylar is having identity problems, he offers some help but is thrown out. Later, Micah meets with Angela Petrelli and Leona Mills. He reunites Leona with Rachel and then leaves to an unspecified location.

Micah has the ability to manipulate electronic and/or mechanical items. He can manipulate technology whether broken or working. Though his ability to build new technology is unknown, he did say he had created a new motherboard for his computer that he received from his grandfather, Hal Sanders.

"He's going to heal the world."

Please refer to Theory:Micah Sanders for fan-created theories and other speculation.