Masi was born in Tokyo, Japan, but his family moved to Los Angeles when he was 6 years old. He has an I.Q. of over 180, and is gifted with many artistic talents.

Along with standard elementary school, he attended Saturday school in L.A. where he learned English, U.S. history, etc. He graduated in 1997 from Brown University with a major in Computer Science and Mathematics and a minor in Theatre Arts.

Masi spent a number of years working for visual effects studios, most notably George Lucas's "Industrial Light & Magic." During this time he worked on such popular films as Pirates of the Caribbean: Dead Man's Chest, War of the Worlds and Star Wars (Episodes I - III). He has indicated that he worked in programming the tools that the artists use in CGI special effects.

Masi has acted in a number of popular television series and films such as Without a Trace, Scrubs, Gilmore Girls, Sabrina, the Teenage Witch, Austin Powers in Goldmember, Reno 911!, Robot Chicken, Legally Blonde 2: Red, White & Blonde, Get Smart, Fired Up!, Hawaii Five-0, and Mozart in the Jungle. He also wrote the short film Chester's Big Night.

Productions in which Masi has appeared alongside other Heroes cast members include Fired Up! with Nick D'Agosto and Janel Parrish, Robot Chicken with Seth Green and Breckin Meyer, Austin Powers in Goldmember with Greg Grunberg, Seth Green, and Dan Warner, Less Than Perfect with Eric Roberts, Scrubs with Adam Harrington, Along Came Polly with Missi Pyle, Balls of Fury with Marisa Tayui and Darryl Chan, Get Smart's Bruce and Lloyd Out of Control with Jayma Mays, and Gilmore Girls with Karl T. Wright. 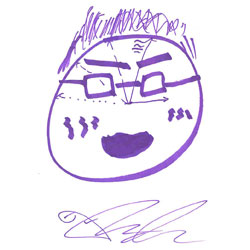 Masi Oka drew this picture of his character in order to raise money for the Pediatric Epilepsy Project.
Retrieved from "https://heroeswiki.ddns.net/index.php?title=Masi_Oka&oldid=84810"
Categories: