Regarding the Ali Larter character; how do we know it's Jessica? Given the recent events, I'd guess ('cause guessing it is) that it is Tracy. Pierre 10:07, 28 September 2008 (EDT)

I don't really get, why this is an alternate Future. I know Peter changed it when he travelled back in time but since this won't be undone I think this is the actual present time of the story and will continue to be the main timeline.--Spielor 22:30, 28 September 2008 (EDT)

Quote from the article: Karen Miller asked: “In last week's BEHIND THE ECLIPSE, you said that the three timelines we've seen so far -- the one Future Peter came from, the one Hiro went to, and the one that lies ahead now -- are all the same. How is that consistent with what Angela and Future Peter said about everything being different now that Peter has come back and changed things?”

You will see tonight exactly what we mean — small changes have occurred but one fundamental problem remains the same in the future no matter which way you cut it. 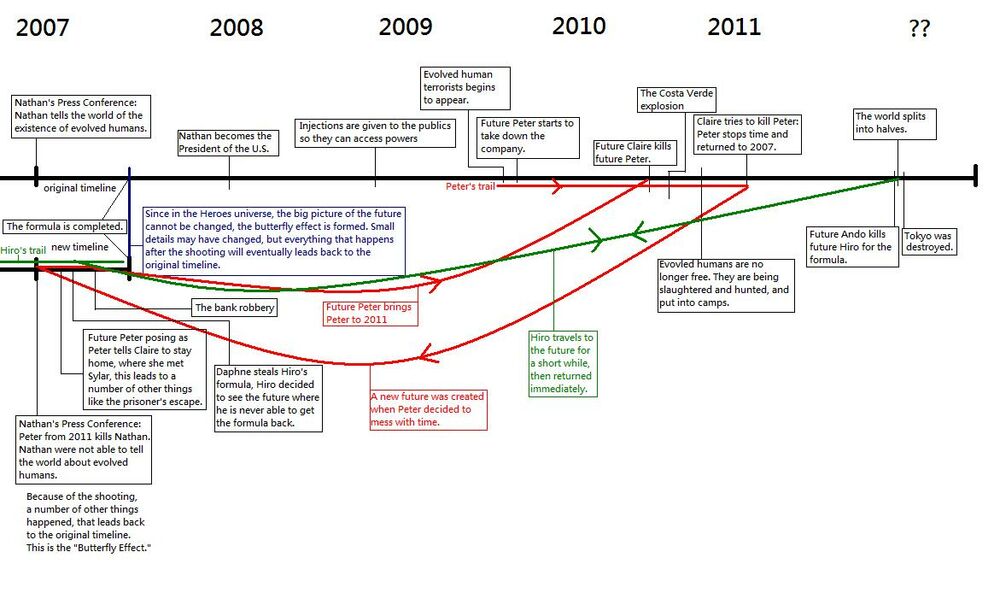 I wanted to get a consensus check on this since there are an increasing number of inconsistencies, and it's likely to get worse with each episode. The arguments are above, if anyone wants to discuss it further before voting.  :)

Merge the exposed & villains futures (include notes on possible timelines)

I also wanted to try and get a list going of pages that need to be changed. So far, I can come up with:

Are there other pages that would be affected by this change? If we proceed, we should probably try to get most of the changes completed before the next episode, to save the extra work and confusion of not knowing where to add the new info. Stevehim 08:06, 10 October 2008 (EDT)