After rewatching Nothing to Hide in the first scene where Peter reads the stock information to Charles, I found it sounded more like "Yamagata" or "Yamagato". Then I looked a bit around in the other episodes and found this in Don't look back: 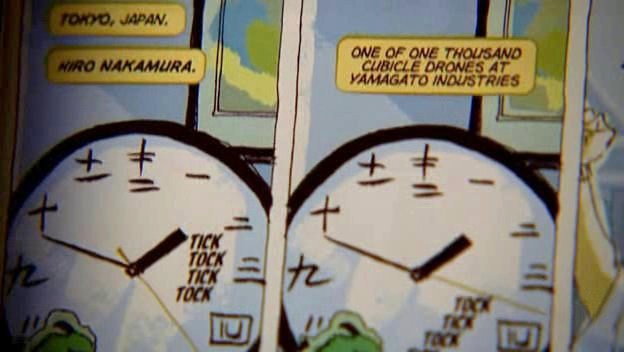 Could someone get an image of Hiro on the roof in Six Months Ago? ----

"Ando works hard at his desk"

Ah, yes, I didn't quite realize what he was doing, just copying the old description. And I quite like my unintentional pun. :) Maybe I should have put Ando "gets off" the computer? - RyanGibsonStewart (talk) 15:36, 28 January 2007 (EST)

Yamagata means "Mountain Form". Not sure what Yamagata means - if anything. Uluru references? Bkdelong 15:03, 16 February 2007 (EST)

From the GN about Ando, we can see that the kanji for Yamagato is 山形, which means "mountain shaped".

as of a brave new world

there was a link posted by DH lawrence and it's a message from Hiro about the revealing of evolved humans to the world here. I don't know where this should be put though. --mc_hammark 21:33, 10 February 2010 (EST)

Should we count him as a "notable visitor"? We only know he is within the virtual Yamagato Tower, but I don't know if that means we can assume that he is in the real tower. He more than likely is, but just wanted to make sure. -Sincerely, Thrashmeister » talk- 14:30, 25 September 2015 (EDT)