David Davis is a student who attends Manaj's School For The Superpowerdly Gifted.

At breakfast on Monday, David recives an ability prism from his grandfather. While admiring it, Tom, Alice and Martian take it off him, but they are all quickly scared away by Mr King. Later that day, while being given a flying lesson by Miss Yaga, David looses conrol over his ability and ends up injuring himself. 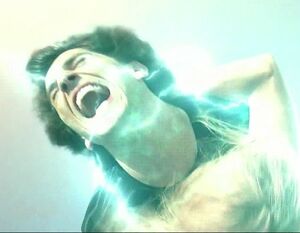 David flys with his ability.

While trying to get to sleep, James mentions that David wasn't back from the Hospital Department yet.

Jenny, Michael and James confort David because Tom had been trying out his ability out on him. James then goes on to tell David "he's worth twelve of Tom." David is partly responsible for the finding out of Shanti Suresh.

In time, David learned about James and Jenny's attempt to take Max up to the Tower to send to Michael's sister Stacy. When he learned Tom Johnson was trying to get them caught, David snuck out of common room to find them and warn them. He instead ended up getting caught by Mr King. He was put in detention with James, Jenny, and Tom.

Sent into the Forest with Donna, David and Tom went along one path, while the other three took another. When Tom snuck up behind David and grabbed him to scare him, David panicked and sent up wand sparks to warn Donna. When Donna learned the truth, she instead paired David with herself and Jenny.

On the night Glad Yaga attempted to steal the Shanti Virus, David attempted to stop James, Michael and Jenny from sneaking out, though he did not know what they were trying to do. However, he thought that they should not be breaking rules and risking that Bennet would get into trouble, and blocked the door, willing to fight them to make them stay. Jenny apologised and put David into a deep sleep so that she, James, and Michael could leave.

David has the ability to absorption, transference, and redirection energy.