Jenny Scarlet is a student who attends Manaj's School For The Superpowerdly Gifted. She began attending the school, when she was seventeen, and was sorted into Bennet House.

An academically brilliant student, Jenny became best friends with fellow students James Connol and Michael Sham in her first year of school. Michael and James thought of her as obnoxious and self-centred, a belief that she only furthered as the school year went on, besting them in every class. However, when Michael and James saved her from a dragon, she took the blame for them and became their friend.

Jenny attached herself to James and Michael, following them around and trying to prevent them from breaking school rules and getting into trouble.

On one night, she followed them as they were leaving commonroom to duel Tom Johnson. They were chased by Stacy Sham into the third floor corridor — forbidden to students — where they came face-to-face with a three headed animal.

The friendship between the three was solidified when, the three were forced to confront a dragon. Unaware that a series of explosions were happening in the school, Jenny had spent that day crying in the girls' bathroom after overhearing Michael making unkind comments about her.

A dragon made its way into the bathroom she was in, and James and Michael came to her rescue, saving her. When Mr Malcome King, Debras Sky, and Glad Yaga arrived at the scene, Jenny covered for the boys, claiming that Michael and James had merely come to help her escape. From that point on, the three students were best friends.

Jenny makes James and Michael serch the library for information about Shanti Suresh. 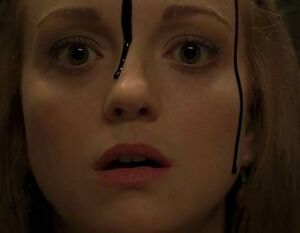 James looks on at Jenny's future.

Jenny is absent for the events of this episode and is only mentioned. However, James sees a projection of Jenny in the future with her scalp removed.

Jenny can replicate the ability of any evolved human she touches.