Cassandra Hays is Dahlia's younger sister. An orphan, Cassie is held captive in the Quarry by Trevor Mason. 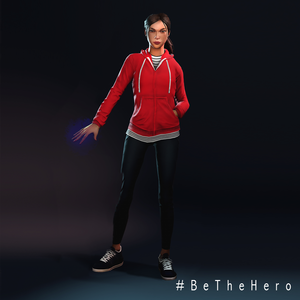 Cassandra, as she appears in the video game Heroes Reborn: Gemini

In the video game Enigma, Cassie is held captive as a young girl in the Quarry in 2008. She has no parents, but she has demonstrated an ability. Quarry director Trevor Mason somehow uses Cassie to give Cassie's sister Dahlia an injection of the Gemini Formula, which successfully gives Dahlia additional abilities of time slow and time shift. The two sisters are permitted to see each other occasionally, but are generally separated from each other in the facility.

Later, Cassie reappears in the Quarry as an older woman. She doesn't remember anything of her past, but she is promised that she will learn about her family while in the Quarry. She runs into Dahlia, and neither recognizes the other. Cassandra figures out that they are sisters and that she is somehow from the future, but doesn't understand how she got there or what happened to her memory. The two girls escape the Quarry together, helping each other out. They are both happy to be free, but Cassie's missing memory is worrisome.

Cassandra naturally has the ability of Space-time manipulation. She rediscovered the ability at the age of 20, when she went to the Quarry to learn who her parents were. The search for her friend Alex helped Cassandra hone her ability. Her natural ability allows her to slow down time, see through time periods, and time travel between June 16, 2014 and July 13, 2008.

During her search for Alex she became stuck in an observation room where she overheard scientists talking about the Gemini Formula giving people Dahlia's telekinetic abilities. The only way out was to inject herself with the formula. Cassandra was able to hone these abilities while in the Quarry so she could defend herself from the guards in the present and the past. Telekinesis allows her to pick up objects from a certain distance, move them, throw them, and drop them.