As an orphaned evolved human child, Dahlia Hays was held captive in the Quarry where she was given an injection of the Gemini Formula which granted her several new abilities. After escaping with her sister, Dahlia went on to work with Hero Truther for evo equal rights.

Footage of Dahlia's "attempt video" is spliced into Hero Truther's broadcast. She states her name.

When Quentin Frady enters Hero Truther's hideout, Dahlia uses her ability to hold him in place and grab the pen in his shirt pocket. Finding no wires or weapons on his person, Dahlia says that he is "clean" and gives the pen to Hero Truther. After Hero Truther reveals himself as Micah, and the power in the hideout shuts off, Dahlia assumes that Quentin led Renautas right to them. When agents attack and stun Micah, Dahlia tries to hold them off in an effort to prevent her friend's capture.

Dahlia is working as the receptionist at Lumiere Ophthalmology when Noah Bennet walks in. He asks her if he has ever been to the facility and Dahlia tells him that she has never seen him before. Noah reveals he received a card that says "see more clearly" and pressures her to check the records for his name. Dahlia then pulls a gun on him, but is stopped by René, who introduces Noah as a friend.

Dahlia, René, and three other evos discuss the capture of Micah Sanders with Taylor Kravid.

Dahlia travels with René, Henry, Deirdre, Logue, and Taylor to Sunstone Manor to free Micah. Dahlia looks for an easy way to get into the manor, but all she can find is sewage pipes. Later, when Taylor escapes the manor with Carlos and Farah in tow, Dahlia and the others walk down the hill to join them. An army of Harris clones appears behind them so the group splits up to evade the clones. 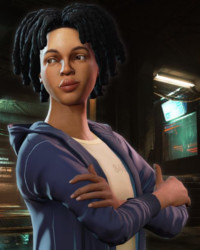 Dahlia, as she appears in the video game Enigma at age 14

The video game Enigma takes place primarily in 2008, when Dahlia was 14 years old. Dahlia is held captive in the Quarry, separated from her sister and fellow captive Cassandra. An orphan with abilities, Dahlia is held captive by Quarry director Trevor Mason, who is experimenting with the Gemini Formula. Trevor helps Dahlia discover her power of telekinesis, which she begins to master, despite some self doubt and past history. Trevor gives Dahlia an injection of the Gemini Formula, which also grants her additional abilities of time slow and time shift. Dahlia uses these three abilities to pass tests, escape various chambers, and increase her control over her abilities. In fact, Dahlia becomes Director Mason's "star pupil", and an integral part of the success of his experimentation, especially considering that most other injections have not been successful.

Since she is able to time shift to 2014, she can see that something catastrophic happens to the Quarry and she sees the aftermath of its destruction. She tells this to Director Mason who at first denies that anything could ever happen to the secure building, but then grows increasingly worried and fearful of the site's fate.

While in the Quarry, Dahlia is able to hide the Gemini Formula safely in the future so that Trevor Mason can't find it. She also meets a woman whom she learns is actually her sister Cassie, but older and from the future. The two reconnect, and help each other escape the Quarry, though Cassie's memory is not intact.

Time traveling to 2008, Cassandra watches as two doctors forcibly give Dahlia an injection. Later, Cassie recognizes Dahlia in her cell, but doesn't know that they are sisters. Dahlia explains that at the Quarry, they extract the abilities of evos and inject them with new ones with the Gemini Formula. Dahlia says the only family she has is her sister, and implores Cassie to help her and the other prisoners. Later, Cassandra sees Dahlia in a training exercise, and tells Dahlia that she is trying everything she can to get the prisoners out of the Quarry. While talking, Cassandra realizes that Dahlia is her big sister. Cassie helps Dahlia with her training exercise. They decide that they don't need Mason's information, and that they will hide the Gemini Formula from Mason. Cassie then leaves Dahlia to escape the Quarry with a younger version of Cassie.

Dahlia naturally has the ability of telekinesis. She discovered the ability at the age of 14, when she was held captive in the Quarry. Trevor Mason helped Dahlia hone her telekinetic ability, which allows her to pick up objects from a certain distance, move them, throw them, and drop them. According to Dahlia's Pinehearst file (number 33588611), she can use her telekinetic abilities to lift objects under 20kg, but with training she might be able to lift heavier objects over 100kg.

Director Mason also gave Dahlia an injection of the Gemini Formula, which had something to do with her sister Cassie. The injection gave Dahlia two additional abilities: time slow and time shift. Dahlia was able to hone these abilities while in the Quarry so she could slow down time to the point of being able to run across a room and exit a closing door. Dahlia has also been able to time shift between 2008 and 2014. It is unknown if Dahlia can shift to any other times, as those are the only two years she has been able to shift between thus far. Dahlia has also shown great aptitude at combining these abilities, most notably by telekinetically carrying objects from one time to another, or using telekinesis to throw an object, time shift to another time, time shift back to the original time, and catch the object telekinetically.