Matt Parkman, Jr. is the infant son of Janice and Matt Parkman. Matty, as he is commonly called, was thought to be the son of Tom McHenry. Matty spent the earliest part of his life without a father but when his ability manifested, Matty became a target of the government and was introduced to his father, Matt Parkman, by Hiro Nakamura and Ando Masahashi. He now lives happily with both his parents. He is an evolved human with the ability to activate and deactivate mechanical and biological systems.

Janice tells Matt that they're having a baby.

Matt, trapped in an illusion created by his father, meets Janice and her son in a jail cell. Janice accuses Matt, saying that he knew that Janice's son, who was supposedly the son of Tom McHenry, was actually their own son. Matt protests, saying that he didn't know anything, but Janice ignores him and leaves the jail cell.

Hiro and Ando go to an address in Los Angeles to save Matt Parkman after a message from "Rebel". Hiro and Ando are surprised when a babysitter gives them a baby, tells them it is Matt Parkman, and leaves. 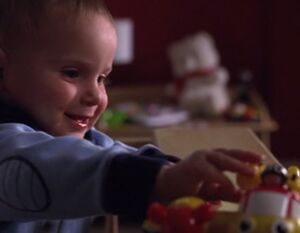 Matty prepares to turn on his toy plane.

Hiro and Ando are initially confused, with Hiro believing that Matt Parkman has been turned into a child. Ando realizes that they are not, in fact, dealing with Matt Parkman as a baby, but rather Matt Parkman's son. When Hiro unplugs a television and it comes back on while not plugged on, he and Ando realize that the baby has a power. The baby continues to demonstrate his power, giving motion to various toys. Hiro and Ando dub him "Toddler Touch and Go." They later meet Janice Parkman, who upon being asked if she knows her child is "special," reveals that Matt Parkman, Jr. first started demonstrating powers around the time of the eclipse. When members of Danko's team appear to bring in Janice and Matt Jr., Hiro and Ando hide the child. Then, when Matt Jr. touches Hiro, some of Hiro's power returns--he is again able to stop time, though is not able to teleport.

Hiro and Ando are walking through Los Angeles with Baby Matt, who activates a Nissan Cube in the street. The baby needs a diaper change so they go to a Valumart in search of baby supplies. Baby Matt activates an electric shopping cart which knocks down a large pile of melons, and Ando uses his red lightning to blast the melons away. While Hiro and Ando are choosing a stroller, Matt gets into a forklift and causes chaos, knocking boxes from the shelves, breaking a rack of plant pots, and scaring a sales employee by turning on some leaf blowers. Hiro stops time and removes Matt from the scene. When Hiro tries to pay for their purchases, Matt touches the checkout and Hiro and Ando tell the cashier to keep the change in order to make a quick exit. Outside the store they find the Nissan Cube waiting for them.

While Hiro and Ando are driving and trying to communicate with Matt, Baby Matt begins to cry. Suddenly, the car begins to slow and eventually deactivates completely. Hiro and Ando take Baby Matt and try hitchhiking. Ando doubts that anyone will pick them up and a huge truck stops by. A Japanese driver offers them a ride but does not understand when they speak Japanese. He tells them to speak English and introduces himself as Sam Douglas. Baby Matt does not like the sound of the truck and begins to cry, using his ability to deactivate the truck. Sam throws the two out and they head back to the Nissan Cube. In the car, Hiro and Ando, having realized that Matt is the one causing the break downs, try to cheer him up. Matt laughs at Ando's funny face and Hiro begins to drive to New York. Along the way, Hiro and Ando get into contact with Mohinder who tells them that Matt has gone to Washington to get revenge.

After Hiro saves Matt Sr., he takes him to a park and begins to tell him that he is a hero, not a villain. Ando spots them and calls out, causing Matt Sr to notice the small child with Ando. Hiro introduces him to Baby Matt and the two instantly connect. Overjoyed, Baby Matt uses his ability to make several toy cars drive around in circles. Later, while Hiro and Ando are putting away groceries, Baby Matt is playing with his daddy.

Matt decides to return his son back to his ex-wife. He explains to Hiro and Ando that he can not help them because his son is a "game changer". Matt calls Janice at her home and tells her that they're on their way there. Janice asks Matt to let her speak with their son, and she tells Matt Jr. that they will be together very soon.

Later, he arrives at Janice's home and delivers Matt, Jr., realizing that agents are watching the house. As they prepare to leave Matt holds onto his ex-wife and his son as Danko's men storm into the house, using his ability to conceal his family from the agents.

Samuel talks of the many evolved humans living in the world. Matt, Jr. is depicted as one of them, as is his father Matt. He is later seen playing with his father just before Matt receives a call. Later, Matt discovers Sylar holding Matt Junior.

Matt tries to convince Sylar to hand over baby Matt, and not to hurt the child. Sylar holds on to Matt, Jr.

Sylar says that Matt is so desperate for his kid to love him, and he never will.

Still hallucinating, Matt sees figments of Sylar telling him that he is going to hurt his son.

Matt tells Janice that she needs to take Matt Jr. and leave because there is someone in his head who is trying to take over his body. 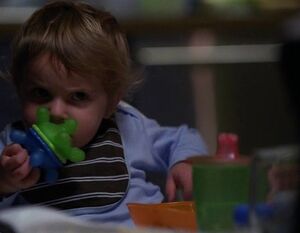 When Lydia touches Sylar and senses his feelings, the memories in his head include images of Matt with his son.

Matt tells Janice that Matt Jr. is still sleeping after watching the movie Ratatouille the previous night. That evening, Matt cooks ratatouille for his family and feeds his son with a spoon at the dinner table.

Janice is tending to Baby Matt when she hears the door.

Sylar says to Matt that he'll hurt his family if Matt doesn't do what he wants.

Micah finds Renautas's list of everyone scheduled to be taken to the future. Matt Parkman Jr.'s name is on that list.

Matt Jr. has the ability to activate and deactivate biological and electronic things. For example, he is able to turn on the television when it is plugged in, and when it is unplugged (Cold Snap). He also turned on a toy robot, a dancing monkey, and a toy airplane. When Ando got knocked out by a hunter and Hiro was left holding Matt Jr. and when Matt Jr. touched Hiro's face a portion of his ability (to stop time) came back. Later, after over six weeks, Hiro's ability to time travel returns and some time later his ability to teleport returned as well indicating that Matt was able to restore all of Hiro's abilities but there was a delayed effect for some reason. When Matt Jr. is angry or scared, objects around him deactivate. It is unknown if abilities are affected when Matt Jr. is in a similar state.

Please refer to Theory:Matt Parkman, Jr. for fan-created theories and other speculation.