In the Bennet house in Costa Verde, CA, Claire opens the microwave and finds nothing. She turns around and is confronted by Eric Doyle who has received a text message from Rebel saying "Claire will save you." Claire tells him to get out of the house. Sandra gets down and Eric asks help from both of them. He tells he wanted to be a puppeteer again. Claire immediately refuses. Sandra warns him telling that there are agents parked outside the house. But Eric explains that Rebel made a fake call to misdirect them but they would be back very soon. Then he asks why they don't catch a comes-back-to-life Barbie. Claire says she got a free pass but if she would help anyone they would come after her. Eric questions her loyalty to her own kind, says they burned his theater and expresses that she wouldn't know the feeling of being hunted. He tells them that he's changed and that he wouldn't force anyone to do anything against their will. He then leaves the house.

In Building 26, Nathan discusses with Danko about the operation to capture Peter. Nathan blames Danko for not releasing Parkman and Millbrook, while Danko justifies himself telling that Peter got lucky. Then he asks how many people knew Peter was on that rooftop. Nathan gets a phone call and learns that Matt is on Capitol Hill, tied with bombs in his chest. 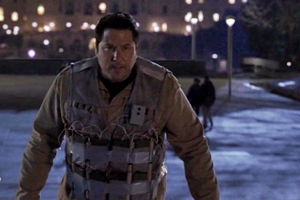 Matt is framed as a terrorist.

On Capitol Hill, Matt is alone when SWAT trucks and the bomb squad arrive. Nathan appears and tries to help Matt disable the bomb. Matt tries to read a bomb squad member's mind but he is unable to focus clearly. Danko wonders how Nathan reached the scene so quickly, then attempts to activate the bomb but the signal is blocked by Rebel. Matt manages to read the mind of a bomb squad officer, and tells Nathan he's thinking about the black wire on the device, which they disconnect. Danko regains control of the system, but Nathan and Matt have already disabled the bomb. Nathan then knocks Matt out, telling him he's sorry but he can't have him reading people's minds.

Sylar arrives at his father's trailer, and confronts him for abandoning him and killing his mother. Sylar announces he's going to kill him, and Samson turns around, attached to a respirator, and tells him to go ahead as he's dying of cancer anyway.

Nathan confronts Danko about the Parkman bomb, and tells him he'll make sure he's removed from his position. Danko plays back the recording of Tracy yelling that Nathan is "one of us". Nathan arranged for Tracy to be transferred to Building 26, and as she is marched back in, she sees a message from Rebel telling her to have hope because help is coming.

Nathan then enters her cell, and whispers to her that he is her only hope to stay alive. Danko bursts in and once Nathan has left, questions Tracy himself. Tracy says that Nathan was "lousy in bed", but when Danko asks if he has an ability, she says she has no idea what he's talking about. 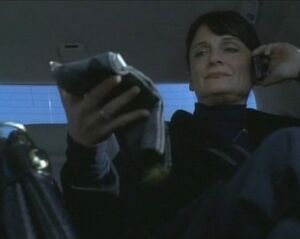 Angela still has a thing for socks.

Claire is considering Doyle's plea for help, and calls Noah for advice on whether she should follow her calling and help other specials. She decides she will, but to protect her mother and Lyle she decides to get a job at Sam's Comics and operate from there. She approaches the manager who asks her several difficult questions, and Claire is about to give up and leave when the manager tells her she's got the job.

Sylar discovers that his father has the same power of intuitive aptitude when Samson demonstrates his power of sedation on a rabbit.

Noah calls Angela Petrelli in her limo, telling her that Nathan and Danko are escalating their "cold war" against each other, and that he is concerned that Nathan is moving too fast and will play his hand too soon. Angela, clutching a pair of argyle socks, tells him that she has the situation under control.

Claire receives a message from Rebel that agents are closing in on Doyle nearby. Doyle uses his ability to knock Rachel Mills out, and Claire saves him from being tased by Jason Pierce. Later that night, she gives Doyle some fake IDs and tells him to go into hiding. She asks him if he's really changed, and he just smiles and walks away. 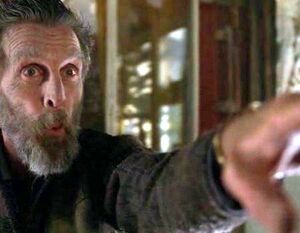 Danko meets Angela in a high-class New York restaurant, where she is eating oysters. Danko asks if Nathan has an ability, and Angela tells him it sometimes skip a generation. Angela tells Danko that she knows about the incident in Angola, and wonders how he survived when so many civilians died. Danko admires her resourcefulness, and then leaves.

Sylar helps his father stuff the rabbit, until Samson notices Sylar's cut heal when he slips with a knife. Realizing that Sylar can heal, Samson uses telekinesis to pin Sylar to the wall with several arrows, then sedates him.

Sylar wakes up to find his father trying to cut open his head, shouting that he must have the healing ability. Sylar uses telekinesis to disarm and restrain his father, and comments that as a hunter, he must have known he was "playing possum". He nearly strangles him with his oxygen tubes, but leaves him to die in pain, taking the stuffed rabbit and saying he now knows what he has to do.

Nathan presents Danko with a signed order from the President, removing him from the project. He tells Noah that he's in charge now, and takes him to meet the President. Danko confronts them in the corridor, and points a gun at Nathan. He fires twice into the glass elevator behind them, and then pushes Nathan through the broken glass. Nathan falls for some distance, then floats in the air and flies away. Danko asks Noah if he knew about Nathan's ability.

Claire hands Doyle a new identity, to start over again. Doyle asks her if he deserved help because he spared the agent's life. Claire says this is about who she needs to be right now. Doyle thanks and leave. 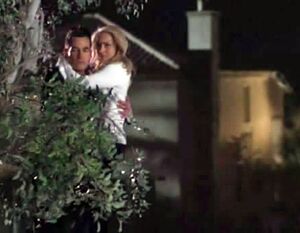 Hiro and Ando arrive at the Los Angeles address they were sent to by Rebel, looking for Matt Parkman. A teenage girl storms out of the house, saying she's had enough of this babysitting assignment, and assumes that Hiro and Ando are her replacements. To their surprise, the "Matt Parkman" Rebel has sent them to protect is the baby.

Claire lies on her bed, and receives a message from Rebel, telling her that her free pass is up, and agents are coming for her. Agents burst into the house, pushing Sandra and Lyle aside and searching Claire's room. Outside, Nathan is floating in the air, holding Claire in his arms as the agents search the house.

Danko returns to his apartment to find a stuffed rabbit on the table. Sylar is waiting for him on the other side of the wall.

"But if there were agents outside... why aren't they kicking in the door, looking to collect a comes-back-to-life Barbie?"

"I want to know everything you know about Nathan Petrelli."

"Is that why you killed my mother, why you abandoned me?"

"I don't even remember. Didn't matter to me. So few things do."

"Then you just have that much longer to suffer, don't ya?"

"It's amazing how fast it all comes back to you"