Matt and Janice Parkman live in a house in LA with their son.

Hiro and Ando arrive in Los Angeles and go to an address provided by Rebel. They meet a babysitter who gives them a baby.

Hiro and Ando try to take care of Matt Parkman, Jr., and discover his ability to turn things on and off. Janice arrives home, and talks with Hiro and Ando about Matt Jr.'s power. When some of Danko's men arrive to take Matt Jr., the baby uses his powers on Hiro, reactivating Hiro's ability to stop time. He then carries Ando and Matt twelve miles away from the home to a Greyhound bus stop.

At home, Janice receives a call from Matt, who is using a pay phone. She talks to Matt, Jr. and Matt tells her that they'll be with her soon.

Later on, Matt arrives at Janice's home with their son, and finds a note left by Janice saying that she will be back soon. Once inside, Matt marvels at how great the house looks, and tells Matt, Jr. that they were never doing very well as a couple. When Janice arrives, they hug and Matt detects agents watching them from down the street. Matt tells Janice that he has to go with them into hiding, and Janice says that they need to discuss this. After Janice gets ready, Matt says that he's decided he wants to have a life with her in this household. Suddenly, the agents break in and search the house, oblivious to the family thanks to Matt's ability.

Matt stumbles over one of his son's toys, and when he goes to look in on him, he finds Sylar holding him.

Matt attempts to get Sylar to put his son down, but when Janice comes in, Sylar is gone and Matt Jr. is in his crib. The next day, while he is preparing to go to work, he finds the water boy playing with Matt Jr., and that he is also on a first name basis with Janice. When he comes home later and finds Roy there again, he uses his power to make him change his delivery route.

Matt is horrified to discover that Sylar took over his body and slept with Janice. In order to protect his family, he packs some bags and sends them away without telling him where they are going. He then discovers that drinking alcohol weakens Sylar, and gets very drunk. Sylar disappears just when Janice and Mike arrive, and Matt passes out saying he did it. When he recovers, Mike hands him an AA chip he says he needs to start over. Matt agrees and goes to take a shower, but it is actually Sylar in control.

Matt and Janice discuss their jobs and how Matt is now being a stay-at-home dad. Matt says he'll make ratatouille for dinner. Noah Bennet visits Matt at the home, telling him that he needs help tracking down a Samuel-related woman in Los Angeles.

When they return from the trip unsuccessful, Matt begins to make dinner, upsetting Noah, who is adamant that Matt focus on the job at hand. Matt replies that sometimes it's impossible to save the whole world, and tells Noah to go home and be with Claire.

That night, Matt, Janice, and Matt, Jr. eat their dinner. Matt contemplates over what Noah said and asks Janice if she thinks he's a coward. With Janice reassuring him that she doesn't, Matt looks at his son and smiles.

Janice opens the door to find Sylar standing there. Sylar introduces himself as Gabriel, and says he is a friend of Matt's from the 12th precinct. Janice tells him that he isn't home right now, and asks "Gabriel" if they have met before. 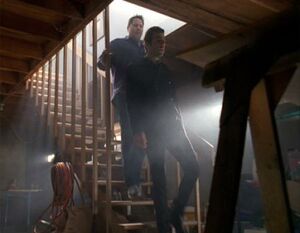 Matt and Sylar head down to the basement.

Sylar comes to visit the Parkman family, asking Matt for help to remove his abilities, due to his repentant attitude. Matt, instead, begs for Sylar to spare his family before turning the tables and trapping Sylar in his own nightmare using telepathy. He begins to build a brick wall in his basement behind which to trap Sylar, but Peter arrives and insists on seeing Sylar. Peter storms down to the basement, reaches past the half-built wall, and touches Sylar's head; as a result, he is drawn into the nightmare as well.

While trapped in Sylar's nightmare, Peter and Sylar are in the basement of the house, Sylar behind a brick wall and Peter slumped in front.

When the two break out of the nightmare, Sylar uses telekinesis to break through the wall. The two of them begin to leave to save Emma, but are stopped by Eli who is standing on the basement stairs, and two clones behind them.

Peter and Sylar have broken out from their nightmare, but they find a devilish Eli waiting for them. They fight Eli and save Matt Parkman, who is just about to be killed upstairs by Eli clones. Matt then argues with Peter over using Sylar to stop Samuel, but Peter and Sylar are able to convince Matt, who lets them on their way. Meanwhile, Matt uses telepathy to get Eli to do his will.