Ray Bradbury is an American fiction writer, and is known for dozens of novels concerning aspects of space and time travel.

In a Midland motel room, Hiro and Ando watch Isaac painting Hiro and the Dinosaur. Hiro worries that stepping on a bug could change the entire course of time. 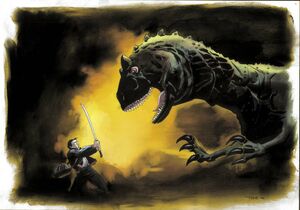 Angela asks Future Peter if he has ever heard of "the butterfly effect". She explains that if you kill a butterfly today, you could wipe out a million people three years later.

Hiro tells Samuel about his concerns with changing his past. He worries that the butterfly effect will cause major problems if he prevents himself from receiving a message from a fortune teller.

In order for Hiro to take Noah back in time, Noah has to first promise not to step on any butterflies.

When discussing how he found out that Noah Bennet was the key to stopping the H.E.L.E. future, Tommy Clark tells him he did as Hiro taught him and followed "the tiniest thread, the smallest butterfly" which led him to Noah.