For Part 1 of this episode, see Orientation.

Sylar confronts Matt and explains that he's now part of Matt and he's inside his head. Matt figures he's not real but Sylar points out that he's holding Matt Jr., and won't put him down until he gets what he wants. He demands to know where his body is and then says Janice is coming. He starts to toss Matt Jr. at Matt… and Janice arrives. Matt Jr. is in his bed and Sylar has disappeared.

In Washington, Noah is turning off his smoke alarm after burning supper. He makes himself a bowl of cereal and calls Sandra, and a man at the other end picks up. Sandra takes the phone but Noah hangs up without responding. His phone rings again: this time it's Tracy. Noah goes to see her at Danko's apartment where she explains she didn't kill the man.

In the past, Hiro tries to return to his present without success. Young Hiro comes over and has him take a photo of himself, Ando, and Kimiko. Hiro realizes that this is the moment when his young self meets with the fortune teller, and that he has to resist altering the past. He tries to time travel again but is unable to. Samuel is running a booth, calls Hiro by name, and says they're going to be great friends.

An Arlington detective talks with Claire and wonders if Annie had any self-esteem issues. Claire insists Annie didn't have any issues and the detective shows her Annie's suicide note that is on her bed. Claire clearly remembers there was no suicide note on the bed when she came in and that Annie wouldn't kill herself.

Ando is pacing his office when Kimiko comes in. She wonders where Hiro is and Ando tries to cover, claiming he's hiding. He decides to tell her the truth but Kimiko doesn't believe him.

In the past, Samuel shows him a tattoo on his arm representing the compass and says he has a gift as well. He points out Young Hiro and Hiro explains that if he interferes, he won't become a hero and save the world. Young Hiro emerges from the tent with his fortune, and Samuel suggests he could make his trip worthwhile and change one thing. Hiro sees Ando approaching Kimiko with a Slushy and remembers that he bumped into Ando and caused him to spill the Slushy on Kimiko. Samuel tells him to take the chance and shoves Hiro into the path of the Slushy. Hiro disappears and reappears in the present in his office. He explains where he went and wonders if anything has changed for Ando. Ando insists that nothing has changed. Kimiko comes in to demand the rent payments on the office. As Hiro leaves, he sees Ando and Kimiko kiss.

Tracy explains to Noah what happened, and she had decided to let Danko live. She describes Edgar and the fact he was looking for something. Noah realizes all the wounds were to the stomach and reaches in. He finds a key in Danko's stomach.

Matt prepares for work and discovers the water guy, Roy, playing with Matt Jr. He's on a first-name basis with Janice and Matt isn't happy. He admits that he's pissed that Roy was there and he wasn't. Matt apologies and Janice notes that he hasn't been sleeping properly. He claims that it's just work and he's needs the name of a drug lord, but he's refusing to use his powers like he promised.

Peter is at his apartment listening to the radio when Noah arrives. They chat and Noah notes that Peter hasn't called his mother recently. Noah notes Peter's scrap board of people he's saved and Peter admits he's been using Mohinder's power to save people and make up for some of what they've all done. Noah tells him that Danko is dead over a key, and it leads to a safe deposit box, one that the killer will be watching. He wants Peter to help him and explains Edgar's power. Peter is interested to know how fast Edgar is.

Sandra drops Claire at the college after letting her stay overnight. She tells Sandra she told Annie's parents about the note but Sandra insists that she should let the police handle it. As they go to Claire's room, Gretchen is there and wants to discuss the supposed note. Claire claims she might have missed the note at first but Gretchen notes that Annie wasn't the type to kill herself. Sandra leaves and Gretchen says that it must be murder and they need to figure out how to prove it.

Noah and Peter go to the New York Federal Bank. As they wait, Noah suggests that Peter stop living alone with no connections, and admits he was the same way. A bank manager comes in with the safe deposit box and leaves them with it. Noah opens the box and finds what appears to be a broken compass inside. Someone knocks on the door, which swings open. The bank employee is dead and Edgar is standing behind him. He comes in and demands the compass. Peter manages to grab him, duplicating his power. He grabs one of the knives as Edgar throws a knife at Noah. Peter snatches it out of the air at super speed and then defends himself as Edgar attacks. The two struggle and Peter manages to land a kick. Edgar goes for the compass again and Peter knocks him back, and Edgar flees. The bank manager is still breathing and Peter gets him to the hospital. As they leave, Peter examines the compass and it activates in his hand. When Noah takes it back, it goes dead. Peter refuses to hold it and insists that the further he is away from Noah, the simpler his life will be. He only came with Noah to get Edgar's ability, which he wants to use for his job of saving people. Noah wishes him good luck and tells him to call his mother. 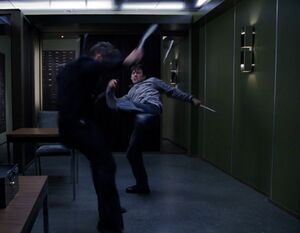 Gretchen picks up some books on forensics and suggests to Claire that they determine if Annie killed herself or was pushed. All they need is a dummy or a cadaver of the same height and weight as Annie, but Claire is reluctant to get involved. Gretchen points out she's already involved.

Matt meets with an officer's recovery group and admits it's been six weeks since he last used, and that he didn't think of how he hurt them. As he talks, Sylar mentally appears to him and taunts Matt. Matt speaks about seeing ghosts and tries to ignore Sylar without success and starts yelling at thin air. Matt's partner observes with some interest.

In Tokyo, Hiro asks Ando if he's planning a wedding with Kimiko any time soon. He tries to explain to his friend that when he went back in time he altered history so that Ando and Kimiko fell in love at the carnival. Hiro accepts that it's his mission to go back and undo wrongs in his life. Ando points out he's dying and can't control his powers, so Hiro decides that he'd better get moving.

Matt prepares to interrogate a suspect in his drug case although his partner notes he was a little upset at the meeting. As Matt offers the suspect coffee, Sylar appears and starts taunting Matt again, daring him to use his power. Matt talks to Sylar, confusing the suspect, and finally throws a chair through Sylar, hitting the wall. The suspect gives up the name as Matt's superior comes in.

Hesam gets into the ambulance with Peter to find him eating clam chowder from Boston. They get a call and Peter superspeeds off. He discovers that Noah is there, badly wounded. As Peter tends to his wound, Noah tells him that Edgar took the compass.

Later, Tracy comes to see Noah in the hospital in response to his call. He explains about the compass and admits it's too dangerous for him to stop powered individuals without a powered partner. Tracy suggests they should try to help individuals like herself and Edgar rather than stopping them. She wonders why he really called and Noah admits he can't call his ex-wife. They discover Peter has left clam chowder for Noah and Noah invites her to join him in eating it. 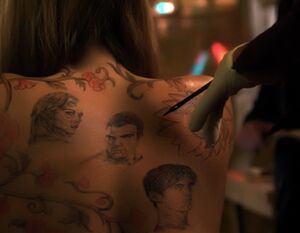 Matt comes home and finds Roy there again. As Roy goes, Matt talks to him privately and asks if he has a family. He then pays Roy $100 and uses his telepathy to force him to find a new route. As Roy goes, Sylar is there to tell Matt "Gotcha."

Claire is trying to sleep in her room but finally comes to a decision. She goes to the window and jumps out, trying to simulate how Annie died. She lands, dies, and heals, and confirms that Annie landed where she had to if she killed herself. Claire looks up and sees Gretchen watching from the room.

Edgar goes back to the carnival and gives Samuel the compass. He admits that he met someone else with powers but didn't get a chance to talk to him. Edgar brings up the fact that Samuel is replacing Arnold, but Samuel insists that you don't replace family. He tells Edgar that he put Hiro on the righteous path and it's time to gather the rest. He uses his abilities on Lydia, causing images of Sylar, Peter and Claire to appear.

"Can I get you something to drink?"

"Love what you've done with the place."

"Thank you. So I have water or mustard."

"It's not healthy to live alone, Peter. No connections to anybody. It's a dead end. Trust me, I'm Exhibit A. For years, I put my job ahead of my family, and now my kids are off at school and I'm eating cereal for dinner and a strange man is answering my wife's phone."

"Where did you get those, the homicide bookstore?"

"Is there such a place?"

"Don't you want to prove your roommate was defenestrated?"

"Of course. And yes, I know what "defenestrated" means."

"Well, don't get mad at me for using it in a sentence."

"Maybe we could swipe a cadaver from the medical school. What? It's a victimless crime."

"Hi. My name is Sylar. It's been about six weeks or so since I've seen my body, and I want it back."