From Heroes Wiki
(Redirected from Spoiler:Jesse Murphy)
Jump to navigation Jump to search

Jesse Murphy was an evolved human who escaped from Level 5. He had the power of sound manipulation.

Sylar looks through Noah's files, including one file about Jesse Murphy.

Jesse can be seen in his cell, continuously yelling that he is Peter Petrelli.

Jesse, together with 3 other villains, Knox, Flint and The German, escape The Company's Level 5 holding cell after Elle's electrical outburst. Sylar attempts to slice open Elle's head and take her ability, but Elle loses control of her powers and gives off a large burst of electricity, knocking Sylar unconscious but also causing the holding cells to malfunction, leading to the escape of the villains.

Future Peter releases Present Peter from Jesse's body. After the two Peters disappear, Jesse and Knox want to kill Noah. Before he can act, he is stopped by Sylar, who kills Jesse and takes his ability, claiming that he cannot yet control his "hunger"

Jesse is in a diner when Knox enters and asks for ketchup, Jesse demands the waitress give it to him. When a group of people enter and say that Jesse isn't allowed in this part of town, he warns Knox of an impending fight. After the two dispatch the group inside the diner using their abilities, they head outside and confront another group, after defeating them, they come upon Noah and the Haitian, who capture them. The two are then seen in their Level 5 cells. 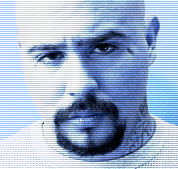 The Company first learned about the subject while tracking information related to his father, Jess Murphy.

Aggressive stress testing has revealed the subject's deep-seated anger toward authority, stemming from his childhood frustration with his parents and their own difficulties assimilating with culture. The resulting repressed anger was severely aggravated by the subject's chronic lack of socialization during adolescent development, in turn resulting in patterns of deeply habitualized violence. While a definite link has not yet been established between the peaking of the subject's anti-social behaviors and the manifesting of his highly destructive ability, further rounds of testing are being designed.

An additional trait that should be noted is the subject's classic ritualization of vengeance and revenge motifs. This portion of the subject's personality was abruptly focused by his capture at the hands of agent Noah Bennet and the Haitian in Los Angeles. The Company has significant psychological and physical evidence including extensive voice recordings that the subject has developed a deeply pathological and malignant fixation with Agent Bennet. 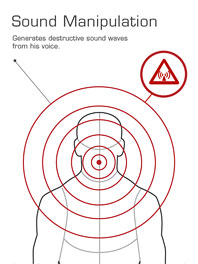 Jesse had the ability of sound manipulation, which allowed him to create powerful sonic waves with his voice. Jesse's use of this ability has been shown to blow the flesh off a person's skull and create powerful concussive blasts (The Sting of Injustice). According to Noah, nobody knows exactly what Jesse could do with his ability (The Butterfly Effect), nor how loud his ability could let him scream.

According to his assignment tracker profile, Jesse's control index was 65%. His data analysis shows his biological level at 20, cerebral at 40, elemental at 70, and temporal/spatial at 35.