Awhile back, on a lark, I wrote in to NBC asking for a hero with watermelon powers — and exuded green and pink, which I have an endearing love for. I know on Heroes, the majority of the cast aren't very colorful (think X-Men uniforms), so I suggested there be a strong exception, or at least, someone's living space could represent that. 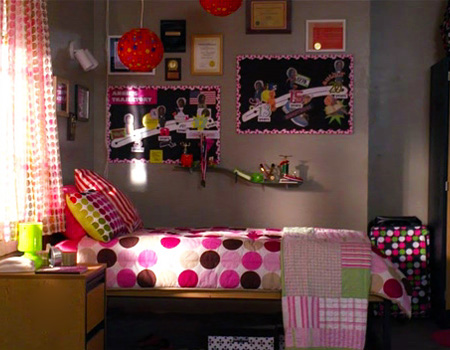 After watching last night's premiere, look at Annie's room! I never received direct acknowledgment so I can't substantiate if they read my wish, but that was awesome... in any case. --Torley 11:01, 22 September 2009 (EDT)

So, what do you think

Jumped, pushed, or fell? I think she had a rough time with a college guy, and fell out the window afterwards. The guy runs off to write up a quick suicide note, Claire comes back while he's out, she heads out herself, he comes back and leaves the note.--Gibbeynator 16:01, 22 September 2009 (EDT)

is there enough evidence to say she has some form of Precognition. I thought this once she mention her elaborate plans for the future. If so, maybe her killer has some power motive. Gretchen perhaps??

I would have LOVED to have seen the Nancy Grace, or whatever the Heroes world equivalent would be, headlines about this one.--Gibbeynator 20:59, 19 October 2009 (EDT)

Something I'm unclear about; if Annie actually was pushed out of the window, why did the results of Claire's impromptu Jump/Push/Fall test indicate that she jumped?--PJDEP - Need further explanation? 15:44, 4 January 2010 (EST)