Isn't saying Guillame is his father speculation? There has been no confirmation he fathered the Haitian and Guillame, they could be half-siblings for all we know. Intuitive Empath - Talk - Contributions 05:31, 25 November 2008 (EST)

Wouldn't the writers' comments imply that the Haitian and Samedi are half-brothers? Otherwise, it's not really 'sleeping around.' --Stevehim 12:45, 6 December 2008 (EST)

Not sure if this is relevant, but did anyone catch how when Baron Samedi was talking about one of the young Haitian girls to Nathan, he quipped, "It is not her choice to decide if she is happy, or sad". This sounds suspiciously like an EXACT description of Guillame's power, no? I feel like that line was more then coincidence... Thelink 13:34, 6 December 2008 (EST)

Nice catch... probably an easter egg for those who follow the GN, kinda like the "it might be Nathan" in Playing with Fire. Intuitive Empath - Talk - Contributions 13:47, 6 December 2008 (EST)

What happened to Samedi?

I think it's probably too early to say for sure, but I get the feeling the Haitian actually killed Samedi. Nathan says nobody should have to make the kind of sacrifice the Haitian did, which could be interpreted as having killed his brother. Coupled with the way they kill the new villains off so fast, I think the good Baron may be no more. --Stevehim 15:13, 2 December 2008 (EST)

Either that or he's in the same state as the Haitian's village after he manifested. Intuitive Empath - Talk - Contributions 17:40, 2 December 2008 (EST)

I personaly think that the Haitain just wiped his mind clean. I doubt he could kill with his power so he's probably in the same state as the Haitain's village. I think Nathan meant that the Haitian pretty much sacrificed his brother by wiping his mind completly. It was probably like he did to Brody but worse, probably closer (or exactly like) what he accidently did to his village.

I think he either wiped all of his memories or used his ability to basically make Samedi brain dead. --Powermimic 01:24, 3 December 2008 (EST)

I think its basicaly the same thing: when he accidently wiped his villiage of memories they were all pretty much brain dead. I think he did that to him.

Demetrius Grosse was credited for The Butterfly Effect, and rewatching the episode, Baron Samedi is seen escaping Level 5 just prior to Eric Doyle. Screenshot: 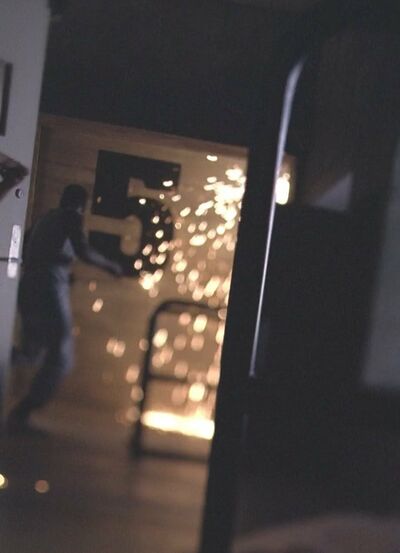 Since he appear in three episode, should we put him in the Season Three Recurring Characters category? User: Jethap

I have addressed this at Talk:Portal:Recurring Characters/Season Three. --Pierre 11:04, 3 December 2008 (EST)

I mentioned it earlier, but figure I'll restate it in it's own section. If we're assuming that Guillame is Samedi's father based on the BTE interview, doesn't that imply the Haitian and Samedi are half-brothers (ie - Guillame 'sleeping around' coupled with the Haitian not knowing about him implies that Samedi had a different mother than the Haitian)? I know it's a relatively minor detail, but it does seem (to me) that that's what the writers were saying, and thus should be noted. --Stevehim 13:21, 8 December 2008 (EST)

Just for the sake of it, could we list Samedi as "incapacitated" in the brackets of character and power pages, like this: "Baron Samedi (incapacitated)"? We list deceased, we could also list incapacitated, since this is a rather unique condition in the show, to let people know he's not active anymore in the "at a glance" look at infoboxes. Intuitive Empath - Talk - Contributions 07:20, 5 January 2009 (EST)