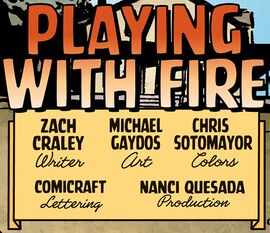 25 years ago, a young Flint amuses himself by burning ants with a magnifying glass. Meredith approaches him and tells her brother that he'd better finish his chores before their father comes home.

Later that night, inside their house, Mr. Gordon returns home, drunk, and asks his son if he has finished his chores. Flint ignores him, causing Mr. Gordon to become enraged and whips out his belt, intending to use it to beat Flint until he becomes more obedient. This has happened before, as Meredith tries to stop her father from beating Flint by suggesting he lie down until he sobers up and Meredith can finish Flint's work, but is merely told to stay out of his way. Meredith, desperate to protect her brother, manifests her ability for the first time and sets fire to the entire living room. The house burns down with Mr. Gordon inside it, killing him, but Meredith and Flint escape.

Watching their home burn, Flint is enraptured by Meredith's power and attempts to copy it, to no avail. Meredith demands her brother cannot tell anyone about this, and Flint agrees, on the condition he be taught to manifest his own power.

Meredith is then taken into custody by a social worker and her colleague. They explain to Meredith that she and Flint will be separated, for their own good. Meredith objects, but there is nothing she can do. Over several years, Meredith repeatedly attempts to find her brother and demand answers, though the social workers refuse, leading Meredith to take up smoking and drinking.

In 1989, Meredith, now an adult, arrives at a public records agency and is told by an agent that they cannot find Flint; as with time they have lost track of him, much to Meredith's frustration.

Just when it seems she will give up hope, Meredith finds and reads a newspaper report about her brother causing trouble. Meredith finds and bails Flint out of jail in Annapolis, MD, where Flint reveals Meredith did indeed teach him to manifest his own flame powers; and he has refined them to become blue-colored flames, to make it "extra hot".

Flint is eager to celebrate his reunion with his sister; and spies a group of local Navy officers having recently returned home, with one looking at Meredith. Flint pushes Meredith into going out for drinks with him, and Meredith agrees, oblivious to what could happen.