I wasn't sure about his ability so I didn't add it, although I think it's something like regeneration since he said he survived the bus crash without a scratch. --Radicell 06:20, 6 January 2009 (EST)

A Fugitive in the Making?

Something tells me that Nathan's appearance at the end of the comic would not bode well for our homeboy, Donald. --Punxas 15:04, 8 January 2009 (EST)

Is he the Liquid man? 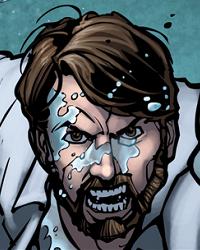 I wonder if he died he sure remained unconscious, but still... the way he dissolve's to Missippi something tells me this will ever be the last time we met him.--Manwithnoname 16:53, 14 January 2009 (EST)