I think from the newest novel, "Trust Issues Part 1" that it's possible Evs is none other than Claude. Think about it, who has a history of watching people and a distrust of both the company and people in general? It's easy to be an eavesdropper when you're invisible. --Mistyjo 07:37, 6 May 2008 (EDT)

In the Graphic novels the name "Evs Dropper" is normally used, "evsdropr" is the username on 9thwonders.com. I don't know if this enough to move the page, but "Evs Dropper" should probably be used in the references to the GNs. -Lөvөl 03:10, 7 May 2008 (EDT)

Hey, I was hoping someone could clarify this for me because I've been scrambling my brains trying to understand if this was a timeline continuity error or I just missed something. Evsdropr received Hana's 'contact list' (at least that's how I recall it being called) in 2008 sometime after Hana Gitelmen's death in in the GP "The End of Hana and Drucker". But if Hana died in 2008, how was Evsdropr manipulating and messing around with company agents as early as Trust Issues which I believe occurred before "Four Months Later" on March 9, 2007? Was Evsdropr already turning the agents' trusts against each other or was this just overlooked by the writers? -- Ericcarner 12:33, 12 June 2008

Evs Dropper is female? I believe Evs was identified as both Connie and what seems to be the escape clone. In fact, Sabine asks, "So you're both Evs Dropper?" Wouldn't that make Evs a group, and not a specific gender at all? -- RyanGibsonStewart (talk) 06:52, 2 September 2008 (EDT)

While we're talking about changes, I think it's about time we move this article to Evs Dropper over evsdropr. The lowercase single-word, vowel-anemic version was what was used primarily, as it was the name used on Evs's 9thWonders.com profile. However, the capitalized, two-word, more grammatically correct version has been used more and more, and especially in more formalized printed texts (see many of the recent graphic novels, Evs Dropper's blog, a note from Evs). -- RyanGibsonStewart (talk) 19:33, 2 September 2008 (EDT)

For posible conversion of thsi article to a "group" 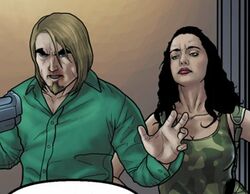 Portal and Navbars and Lists, Oh my!

Articles should include the navbar that corresponds to the portal on which they are featured. For instance, Evs Dropper is a graphic novel group, so the page should have the GN group navbar. Evs Dropper is not a graphic novel character, so the corresponding navbar should not be on the page. Similarly, the Nakamura family is not a graphic novel character, so the navbar should not be on an article about the Nakamuras. Additionally, articles should generally only have one navbar that relates to a portal. In cases like Virginia Gray or Arthur Petrelli, some articles have another navbars (namely the one that lists articles related to Sylar and the one that lists articles related to Linderman respectively) because they are included on list pages. Those extra navbars do not correspond to any portal, but rather to pages that list articles related to a character or subject. If anything, we should be doing away with those "related articles" navbars, much like we did with the navbar about Jessica's victims and the navbar about the Company, but that's a discussion for another day. In the meantime, let's keep one portal-related navbar on a page, and let's only put navbars on articles that correspond to the portals in which the articles are included. -- RyanGibsonStewart (talk) 08:16, 12 September 2008 (EDT)