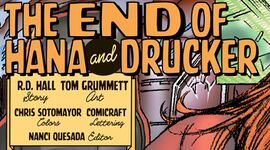 Inside the Company's mainframe, Drucker and Hana float hopelessly in Cyberspace as all the files are destroyed. They attempt to follow the datastream out, but find the way is already blocked. Hana tells Drucker they'll meet again as the two are deleted along with the mainframe's information.

After frying all the computers in the computer room and starting a fire, Elle checks on Matt, who fell to the ground during all the destruction. A few men run in to put out the fire while Bob asks Elle what happened. She says she did what he told her to do-- destroy the mainframe, including the viruses, and store all the information in Matt's brain. Matt lays motionless on the floor, so Bob tells his daughter she'll have to jump-start his heart. Elle's not sure she can do it, but Bob persuades her by letting her know they have to save the data. After a bit more coaxing, Elle shocks Matt and gets his heart pumping again.

Matt is heavily congratulated by Bob, who calls Matt a hero and tells him he saved the day. Elle asks her father if she was a hero, too, only to be brushed off. Bob tells Matt he has a special treat for him.

Now living in a new room, Matt plays a video game. Elle knocks on the door and says she's allowed time for the both of them to head outside for a little while. However, when Matt exits, he sees two men. They take him to an operating room and prepare to extract the information. Elle embraces Matt and reminds him she would make sure he won't get hurt. Unfortunately, Matt's brain can't handle all the data he memorized and it causes an overload, killing him. Bob says it had to be done and tells the surgeons to take the files out as Elle looks at Matt's corpse in shock.