Does Michael Fitzgerald have this ability?

Sylar stated that he had enhanced strength and enhanced durability. Would this be similar to what Samedi has?--ACDC1989 06:11, 25 November 2008 (EST)

Should this really be here right now?

We don't even have an image for this power, the only mention is by The Haitian. I thought that if we don't see a character use his/her ability, it should be listed as "unconfirmed"? The same thing as people like Albert Rossling, Paul Harding etc. We know their abilities but we haven't seen them use it so we don't have a separate page for the ability. Radicell 08:54, 26 November 2008 (EST)

Will this power be stopped by the eclipse and if so then why not just let out lots of bullets when he came near, or does angela want her collection back? What happens if a bullet or knife hit his skin? will the bullet ping off or will it stop or will it just break on contact with his skin? would a knife just bend or shatter?--345tom 17:17, 29 November 2008 (EST)

Impenetrable skin does not seem to be a completely accurate description of this ability. It would not prevent breaking of bone or damage to muscles. Baron Semedi seemed to be completely uninjured after being slammed into the jeep by Nathan. 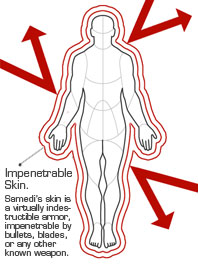 Sylar took Keep's ability by telekinetically removing his brain through his mouth and nose. (Given the numerous problems with this scene, it's best it was never aired.) ebrown2112 10:05, 10 December 2008 (EST)

Wouldn't a power described simply as "Impenetrable Skin" imply that the internal organs would still be severely damaged due to objects impacting the body at high velocity (or in the case of Nathan Petrelli flying Baron Samedi into the car, the body impacting a large object at high velocity)? I think a better description of Samedi's power would be "Impenetrable Body". --Psych31mwo 13:44, 28 February 2009

I know that its in the AT so it won't be changed because we have a canon source or whatever but I thought it might be important to point out somewhere that if Baron's skin were truly impenetrable he would be dead. Your skin is the largest organ in your body and it must breath - it sweats when you are hot and other substances are expelled through the skin - it also absorbs air through pours and it absorbs other things like moisture or vitamin d from sunlight. When tarring and feathering was a form of punishment that was in use I believe most individuals died long after the initial tarring when complications arose becuse all of their pours were blocked. So his skin must be able to be penetrated by certain things. I guess he is immune to his ability. TheHunter 23:45, 5 April 2009 (EDT)

What would happen if he was internally ill, e.g. cancer, or some other lethal illness that required surgery or medicine?--Steely McBeam - (talk) 11:01, 28 March 2009 (EDT)

Or what if he got itchy during the Eclipse, and before he could scratch it, the Eclipse ended? Would his skin repel the irritation?--ERROR 13:11, 30 October 2010 (EDT)

Should the Haitian and Peter's comments me in the nonexistent Memorable Quotes page? Y'know, like "His skin is impenetrable. Not by knife, not by fire, not by bullet."--ERROR 19:38, 17 June 2009 (EDT)

If Phasing and Body Insertion was supercharge or not would any of the ability go through the skin? These are two powers complete opposite to impenetrable skin.{50000JH}