Paula Gramble tells Arthur Petrelli that on the night she attempted to kill herself, “Mr. Linderman” just happened to be there and so he healed her.

In 1993, Paula visits Daniel in his kitchen at the Corinthian. Daniel finishes making a pot pie which he makes sure Paula notes is a turkey pot pie before getting to the business side of their meeting. Paula shows Daniel a photo of Nicole Sanders and also one of her nephew. Daniel asks what the relevance of the two are and Paula reveals that she and Angela believe they would make a good couple. Daniel is reluctant to play matchmaker but agrees when he is told that their future child will be essential in the plan for New York, NY. Daniel and Paula then continue their conversation of his pot pies.

Mohinder Suresh tells Peter Petrelli that “Daniel Linderman” possessed the ability to heal living things. Peter then states that he met Daniel a bunch of times because he was best friends with his father. 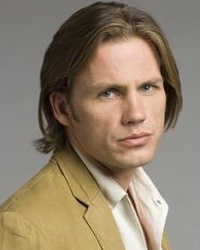 Daniel Linderman, as he appears in 1975.

In 2000, Daniel visits Adam Monroe in his cell at Primatech. To spare his friend from insanity, Daniel tells Adam the date, time, and time since he has been locked up. Daniel and Adam then begin to talk about the New York plan but soon change subjects to support for England and Adam’s “next wife.” Adam soon begins to insult Daniel who begins to argue back, however, Daniel once again becomes sincere to Adam when he asks about his sword. Daniel states that he is keeping it safe from everyone.

The Moment Of Conflict

In 1975, Daniel arrives on Charles Deveaux’s rooftop where he introduces Adam to his fellow founders. Daniel also expresses his sheer astonishment over Adam’s ability, going as far as stating it is monumental.

The Moments To Come

Hanging on a wall in a corridor of The Company are several photographs depicting the Company’s founders. Daniel is featured in the first photo, dated 1961, where he, as a teenager vowed to form an organization alongside Angela, Charles and Bob. The next several photos depict Daniel, among other founders, as they age through the years.

Daniel possessed the ability to heal living things. He had shown he was able to heal plants, animals and even humans, however, he could not bring something back to life.