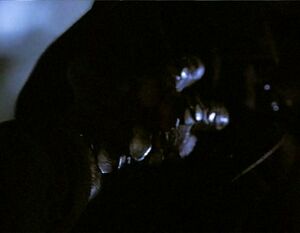 Mohinder has been badly mutated by the imperfect version of the Formula; he is now covered in scales, his hair gone, and his eyes yellowed. Mohinder is greeted in his apartment/laboratory by Molly Walker. Despite his protests, she remains (Turning the Tide). When Matt Parkman and Peter Petrelli arrive at Mohinder's loft, they at first believe him to be a dangerous creature attacking Molly, but the misunderstanding is cleared up and Mohinder offers to synthesize an Antidote (The First Domino). Mohinder helps Molly locate Hiro Nakamura and after Peter leaves, Mohinder catches up with Matt and Molly (The First Step). As Mohinder begins to study the Formula compound, Matt notes that Mohinder's brainwaves are more primal (What We Have Become). Mohinder realizes a way to spread the Antidote aerially and Molly hypothesizes about the nature of Mohinder's bug-like ability (An Irresistible Force). When "Tracy" arrives to speak with Peter, Mohinder leaves the room, claiming to give privacy, but has really used his abilities to suspect Barbara's treachery. After cocooning Molly to the ceiling, he serreptiously warns Peter by activating his latent superhuman hearing and warns him. Barbara realizes her cover is blown and attacks them with her vertigo (An Unbreakable Loyalty). They are saved when Micah Sanders shows up, momentarily distracting Barbara, who he believes is his aunt Tracy, which allows Peter to nullify her ability and knock her out. Believing Peter a terrorist and Mohinder a monster, he tries to save Molly from Mohinder by attacking him with a robot, but Mohinder heals before Peter subdues Micah (The Tongue of Deceit).

Molly is unable to find Hiro so Micah reactivates Mohinder's electricity so that they can use the internet. The light cause the darkness-adapted Mohinder to cringe. When Peter returns with Hiro's body, Mohinder suggests using Linderman's healing ability to revive Hiro, but it is unsuccessful (Falling Angels). After using his ability to sedate and cocoon Barbara, Mohinder examines Micah's robot and realizes that it is capable of distributing the Antidote, if there were more. Luckily, Micah demonstrates the robots ability to self-replicate (Returning Ghosts). When Daphne Parkman shows up at the lab, she is initially frightened, but after returning after a run with Peter, Mohinder is incredulous that Peter could have explained everything within a few seconds. He is, however, later cordial when he learns that Daphne is Matt's wife. When Matt returns, Mohinder is handling Daniella, relating her interest in his scales. When the Haitian stops by to give Mohinder the completed Formula diagram, Mohinder's mutation is briefly reversed. A few days later, Mohinder has Daphne retrieving chemicals he needs to synthesize the Antidote, which he loads into the robots and releases (The Truth of the Moment). The Antidote cures Mohinder's mutation and removes his ability. Peter arrives, regrows his hair, and relates the fact that the Antidote has cured all Specials. After Mohinder explains that the Antidote prevents anyone but Naturals and those closely related to them, Peter forcibly reinjects him with the Formula. With his ability returns, sans mutation, Mohinder is placed as the Head of the Biological Research Divison of the Company at Hartsdale, where he meets Maya Herrera again, who he performs a blood test on before Peter removes her ability (The Moments to Come).

By 2029, Mohinder has been promoted to the position of Research Head of Primatech Hartsdale. Maya has since revealed that her daughter Mila is his, conceived during their brief relationship, and he has a good relationship with her. He and Maya are not together, however. Mohinder and Barbara became close starting in 2012, and by 2029, are happily married. They do not have any children. Mohinder is Molly's godfather, though, and admits that he would have adopted her had his mutation not prevented him from doing so. Since Molly's adoptive father is his best friend, and because they work together, he sees her often.

Mohinder is aware of the Sixers and is actively working to take them down. He is most involved with analyzing the cascading organ failure disease and assigning his subordinates to provide special weapons to fight the other Sixers.

Mohinder has the ability to mimic the abilities of insects and other arthropods. He has demonstrated the ability to leap across the room with enhanced agility and embed his fingers into a cement wall. He can hear and smell much greater than the average human. He also was able to heal a major face wound.

After his ability is removed and returned with the correct version of the Formula, his scales, webbing, and sedation toxin do not return.

"Dude, you really screwed it up the formula, didn’t you?"
"Quite."

"I can do a little. It's the right side of the protein chain that I got wrong, but I'll be able to conjecture about nucleotide bonding along this main chain of carbons ... a hydroxide on the anterior carbon chain is more common, but it might possibly be some sort of nitrogen-based ion. It all depends whether potassium or sodium is the catalyst for the glutamine codon..."

- Mohinder when no one is listening (What We Have Become)

"You're Mohinder? You don't look anything like your picture."
"I’m afraid not. This is what happens when you don’t get the Formula right."