From Heroes Wiki
< User:Tesphen
Jump to navigation Jump to search 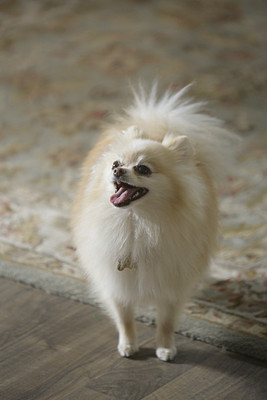 During the course of Heroes there has been indeniable proof that Mr. Muggles is a being of pure evil. Yet still, drawn in by his "cute" appearence, gulible veiwers cannot see the truth. Below I have listed definate proof; proof that can only point to Mr Muggles being really, really evil. Perhaps even as evil as waffles.

Below are all the episodes in which Mr Muggles has slipped up and inadvertantly revealed his evilness.

Lyle Bennet complains that Mr. Muggles humps his leg. A lot of evil people have sexual problems. Hitler did, probably.

Just like a lot of evil people it is shown that Mr. Muggles has a superiority complex. Claire and Zach are forced to carry him so that his paws do not get dirty.

A lot of you will by this point be saying: "This is rediculous! Mr. Muggles does not have the mental capabilities to hold the Bennet Family in an evil reign of terror" but if you watch this episode carefully you will see the dog reading. READING! He is clearly not a normal dog and was catching up on the gossip about nuclear devices.

More evil shenanigance in this episode. Mr. Muggles has bullied a groomer into not cutting one of his claws so that he can destroy the Bennets' floors.

Sylar tells Sandra that he saw Mr. Muggles wandering around the neighbourhood. A likely story! If it is shown in "Nothing to Hide" that Mr. Muggles thinks it below him to walk to a car he isn't exactly going to patrol the neighbourhood is he? It is much more likely that he and Sylar were discussing world domination.

To back up the above point, later in the episode Mr. Muggles licks Sylar's shoes. This might be a dog custom, thanking Sylar for some vital warplans.

This is the episode that first drew me to the possibility of Mr. Muggles' evilness. In this episode his spell on Sandra is broken - probably related to Sylar throwing her into a cabinet - and she sees him for what he is. An evil hellhound.

Mr. Muggles has begun to doubt that Sandra is a good enough slave in this episode. She collapses and he laps up some spilt milk instead of helping her, he also seems immune to the glass shards from the broken milk jug. Didn't Stalin like milk? Come to think of it didn't Stalin like waffles!?

Mr. Muggles doesn't take kindly to his home being invaded. He barks viciously at Ted, scaring the man so much that he decides not to nuke the dog.

Mr. Muggles, realising that it is futile trying to save the pathetic Bennet's hope from being destroyed gets his slave Sandra to take him from the building.

Sandra says Mr. Muggles is in a dog hotel. Not very likely considering that Mr. Muggles is a racist with a superiority complex. He probably escaped to the Conclave of Doom and told Sandra to say that.

Sandra Bennet - Because she is trapped as his slave.

Sylar - Because he is such an evil person.

Claire Bennet - Mr. Muggles does not want to save the cheerleader.

Noah Bennet - Mr. Muggles does not want to take down the Company.

Lyle Bennet - Mr. Muggles has used Lyle for sex against his will in the past.

It is clear to me what the writers are getting at here. Mr Muggles is the reincarnation of Hitler's dog Blondi.