Zach is a teenager in Odessa, TX and attends Union Wells High School. He is Claire Bennet's friend and one of the few people to know of her ability.

Claire has Zach make a videotape of her using her abilities. She also has him film her rescuing a man from a train wreck.

The tape disappears from his backpack, and he promises to look for it.

Zach continues to encourage Claire to take her powers seriously. Claire says that she just wishes to live a normal life.

Claire confides in Zach about what Brody did to her at the bonfire. He tries to persuade her to report it, but she swears him to secrecy.

Zach walks Claire home before her meeting with her biological parents, Hank and Lisa. They discuss how Claire might broach the topic of her powers with them. Zach confesses that he hopes her parents do not have powers, because it makes her more special. She accuses him of flirting with her but he denies it.

Zach comes over unannounced to Claire's home to give her back the tape that disappeared from his backpack. He tells her he found it under his bed while looking for his PSP even though he checked the bed "like fifty times". He is riding his bike while Claire is chasing her brother after Lyle finds out her abilities, and comes to her aid. Claire and Zach chase Lyle into the Bennet SUV. 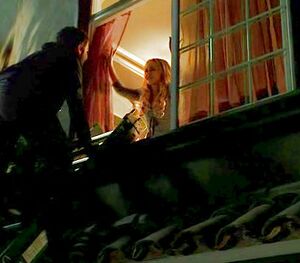 Zach helps Claire win Homecoming Queen by getting the 'freak' vote; all the unpopular people voting for the unpopular candidate. While Claire is grounded by her foster-father to avoid her getting killed, Zach sends her a text message saying he's outside her window. She opens it to see him, and he says "I'm here to rescue you". Zach and Claire start talking about what was said about him at school earlier that day (Jackie implied that he was gay). During their conversation, he says he is happy with who he is and has accepted the 'freak' inside. He says that Claire should accept the 'freak' in her, and be happy with who she is.

Zach brings Claire all the tapes that they made of Claire's experimentations with her powers. She destroys them, then tells Zach that her father knows that Zach knows about Claire's powers, and asked her to make sure that Zach wouldn't talk to anyone about them.

Later, Claire calls Zach and asks him to meet her on the football field; she is scared because Lyle has no memories of her powers. Zach accuses her of calling him "out of the blue" after "not talking to [him] since sixth grade;" Zach's memory has obviously been erased by the Haitian.

As Union Wells opens again after the death of Jackie, Claire meets up with Zach in the hall. They talk and Zach comments that lately there are a lot of things he can't remember, but he shrugs it off with a comment about the water. Claire asks Zach to look at her and tell her if he believes they could ever be friends. Zach looks at her briefly and then says plainly that he doesn't think so.

Some time later, after Claire has talked to the Haitian, she once more seeks him out and brings him to the abandoned refinery where they originally filmed her tape. There she tells him to take his camera and film her, as she climbs up the construction and jumps once more.

At the Bennets' home, Zach helps Claire search for clues about her father's deception on the family computer, but they're unable to find anything. When Mr. Bennet arrives home unexpectedly, Claire and Zach pretend to be working on a school project about manatees.

Later, at the Burnt Toast Diner, Claire and Zach review newspaper articles from 14 years ago. Zach finds an article about a fire in an apartment in Kermit, TX in which a woman named Meredith Gordon was killed, supposedly along with her 18-month-old daughter. Zach theorizes that the kid was actually Claire, and suggests Claire look for one of Meredith's relatives in order to find out more about her parents and possibly even find out who her father is.

Claire calls Zach later to update him on her progress looking for one of Meredith's relatives, but is interrupted by her father.

Zach helps Claire with her plan to see her birth mother without anyone finding out; they use their manatee research project as an excuse. Claire's mom questions Zach about the condition of his car, and when he tells her it has had its oil changed and his only tickets are parking tickets, she lets them go.

Once they reach Meredith's trailer, Zach gives Claire some encouraging words and then heads out, returning at the end of the day to pick her up and take her home.

Zach talks with Claire outside school as Elle spies on them.

Later, Zach and Claire walk home from the abandoned refinery after testing Claire's ability for the sixth time and watch a tape of the attempt. He and Claire are spied on from afar by Elle.

At his home, Zach answers the door and sees Elle come in. She tells him her name's Cindy and he said he would let her see his fourth period English notes, but Zach doesn't recall that happening. He watches Elle grab him on the shoulder and make a ball of electricity in her hand as she tells him to hand over the tape. Noah steps in and pistol whips Elle. Zach thanks Noah for saving his life, and then asks him what his friend is doing there. Noah tells him he's going to make sure Elle doesn't bother him anymore. Zach is then confronted by them as Noah asks where the tape Elle mentioned is.

A week before Homecoming, Claire asks Zach who that blonde girl is, but Zach tells her he has never seen her before. 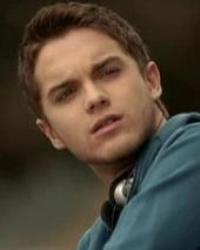 Prior to the premiere, Zach is introduced through his MySpace page. He says that he is a 18 years old coin-operated-boy, living in Odessa, Texas and going to the second class of Union Wells High School. He says that he has a very poor social circle, being friend especially with that one girl. He lists his interests and details where he say he is a Wiccan.

In Claire’s first comment on Zach’s MySpace, Claire asks Zach if he still has a video camera.

In Zach’s first MySpace post, “San Diego”, Zach posts that his mood is exhausted. Zach comments on his trip to San Diego going to Comic Con.

In Claire’s second comment on Zach’s MySpace, Claire asks Zach again if he still have a video camera.

In Claire’s third comment on Zach’s MySpace, Claire tells Zach that she would like to borrow his video camera, but she needs help working it.

In Zach’s second MySpace post, “Lost a Mini DV tape”, Zach posts that his mood is worried. He asks his followers if anyone has seen his lost mini DV tape. He says that it is full of special effects and he thinks it could be at school or at the train tracks.

In Claire’s fourth comment on Zach’s MySpace, Claire asks Zach if he is okay because he has acted weird since the train wreck. She also asks if she could borrow the video camera again.

In Zach’s third MySpace post, “Bears Game”, Zach posts that his mood is complacent. Zach posts about the Union Wells away football game against the Bears that he is going to. He says he is mostly going to support Claire because the football players like Brody Mitchum are jerks. He wonders why Claire gives Brody the time of day. Zach tells his followers that he still has to find that tape.

In Zach’s fourth MySpace post, “Brody and Claire”, Zach posts that his mood is annoyed. He posts about how Union Wells won the game thanks to Brody. He comments on things people like about Brody. One of the things he mentions is his car and wonders what would happen if something happened to the car.

In Zach’s fifth MySpace post, “Just another day in dullsville”, Zach posts that his mood is listless. He tells his followers about how Brody got in a real bad car accident and how he regrets what he said in his last post.

In Zach’s sixth MySpace post, “Blogs are where the truth goes”, Zach posts that his mood is cheerful. He posts about his excitement on having over 1000 friends.

In Zach’s seventh MySpace post, “In the sunshine of your…”, Zach posts that his mood is restless. Zach posts about things that are happening at Union Wells. He claims that people are still shocked at what happened to Brody, that Brody will be back for homecoming, and that he is not interested in Claire.

In Zach’s eighth MySpace post, “Come Home”, Zach posts that his mood is blah. He says how homecoming is coming up and with everything that has happened to Brody, that Union Wells will probably not win. He encourages everyone to vote for homecoming queen.

In Zach’s ninth MySpace post, “Rumors”, Zach posts that his mood is shocked. He claims that rumors must be true that Jackie Wilcox was murdered at the homecoming game. Zach says that people believe it was the same murderer who killed the Burnt Toast waitress the week before. He claims that Union Wells will probably be closed for a while and admits that he found the missing tape.

In Zach’s tenth MySpace post, “Seriously Freaking Out”, Zach posts that his mood is confused. Zach claims that the cheerleaders are hacking into his MySpace account. He blames Claire because she wanted to talk to him on the field. He thinks that it is nice of them to continue to pick on him right after Jackie was murdered. He claims that they have been posting about Claire and some mysterious tape. He says that he is going to go eat at the Burnt Toast Diner and wonders if someone will be there to desecrate the memorial to the waitress that was murdered there.

In Zach's first comment on Claire's MySpace, Zach asks if she did anything special lately.

In Claire's first MySpace post, "zach", Claire says that there is nothing between Zach and her, and that they are simply childhood friends.

In Claire's second MySpace post, "comiccon???", Claire tells her followers that she did not go to Comic con but tells them to ask Zach because he went.

In Claire's third MySpace post, "Zach", Claire asks if anyone has heard from Zach because he has not been online all day, which is weird for him. She tells her followers that Zach does not have very many friends and that they should be friends with him.

In Zach's third comment on Claire's MySpace, Zach asks Claire is she is okay and asks where she has been.

In Claire's fifth MySpace post, "Thank You!", Claire notices that everyone close to her has started to become distant, even Zach.

"I'm all right. Claire keeps punching me, though."

- Sandra, Zach (Nothing to Hide)

"Oh, is the gay boy your date? You should tell him that only one of you gets to wear the tiara!"

- Jackie (to Claire, about Zach) (Homecoming)

"You've got to embrace your inner freak."

Please refer to Theory:Zach for fan-created theories and other speculation.