Peter continues to work with Claude to learn to control his powers. For Peter's first lesson, Claude says that he must learn to hold onto an ability when the person he absorbed from isn't around. To test this, Claude steals a lady's purse, hands it to Peter, and leaves. The woman turns around and sees Peter in the broad daylight.

Tick-tock goes a metronome as Dr. Witherson asks a chained Niki to let her speak with Jessica. As Niki recounts her childhood and her memories of her sister, Jessica emerges and rips off the chains as though they were made from paper and lunges at Witherson.

Meanwhile, at Primatech, Sylar telekinetically throws Mr. Bennet against the wall, grabs his driver license, locks Bennet inside the cell, and flees.

Simone asks Isaac about Peter's whereabouts, but he doesn't know. He's been trying to paint Peter without success.

In Texas, Claire tells her mom that she and Zach are skipping school to talk to a marine biologist at an aquarium for their manatee paper. However, their real destination is the town of Kermit where her biological mom lives. 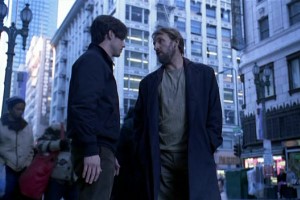 At Port Washington Harbor in Long Island, NY, Hiro confronts his austere father and sister. His father wants him to immediately return to Yamagato Industries and accept a job as a new executive vice-president on his way to taking his father's place as CEO. Hiro rejects this offer and explains his true destiny. In response, Hiro's father rips the painting of Hiro fighting the T-Rex into pieces.

Niki comes to and finds Dr. Witherson badly beaten. Prison guards rush in, smack her with a nightstick, and drag her back to her cell.

Claude suggests to Peter that he can't use his abilities without help because he's still stuck in the mentality of being second fiddle and of serving others. The invisible man thinks that all people are rotten and out for themselves. Peter swears that Simone is "different," so to prove his point, Claude suggests they pay her a surprise visit.

As Hiro attempts to repair the painting, his sister Kimiko tells him that he has brought shame to their family. Kimiko informs him that there are problems at Yamagato Industries and shareholders are saying that if his father can't manage his own son, he can't manage the business.

Claire and Zach find that her bio-mom, Meredith, lives in a trailer park. 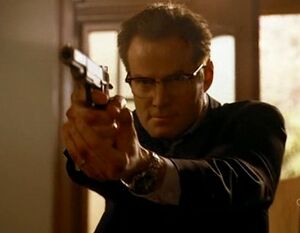 Mr. Bennet takes aim to save his wife.

Sylar has arrived at the Bennets' home in Odessa posing as a deliveryman from Primatech. Sandra graciously accepts him into her house and even invites him to stay for dinner.

Claire and her mom awkwardly get to know each other. Meredith fills her daughter in on her many travels through Mexico and how she just got back to Kermit a couple months before. Claire demonstrates how she may have survived the fire by cutting her arm and healing right before her mom's eyes. Her mom then holds up her palm and lights a fire with the power of her mind.

Sandra starts getting suspicious when Sylar continues to ask weird questions about Claire. When Sandra says she wants to check with her husband about dinner, Sylar responds by using his powers to knock the phone out of her hand. As he goes in for the kill, Mr. Bennet and the Haitian arrive; Mr. Bennet shoots and appears to hit Sylar. Sylar goes running and Mr. Bennet gives the order for the Haitian to kill Sylar. Sylar gets away and Mr. Bennet has the Haitian erase Sandra's memory again.

In Kermit, Claire asks Meredith about her father. "That's complicated," Meredith tells her, holding out the information until "next time."

Simone finds Isaac on the roof of her father's building. Isaac believes this rooftop is somehow connected to what's happening. He doesn't think there's any hope for the future, but she tells him that "I believe in you," as she stands close to him, unaware that Claude and Peter are watching this intimate moment. 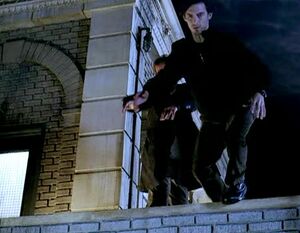 Hiro tells Kaito that he will accept the Executive Vice-President position, and immediately begins issuing orders for the consolidation of all management to Tokyo. When Kimiko protests, Hiro rebuffs by claiming rights by virtue of his new title. Kimiko yells and references her own experience. Hiro smiles and states that this proves that she should be the one to succeed Kaito instead of Hiro.

Niki is surprised by a visit from Aron Malsky, a lawyer for Linderman. Malsky tells her that she's going home because the charges against her have been dropped - the D.A. threw out the entire case when a man on death row confessed to the crimes.

Claude hammers away at Peter's idealism, which only makes the young man angry. When Peter reaches a boiling point, the invisible man tells him the only thing he has to do is fly. Claude tosses Peter off the roof, but Peter is unable to fly and crashes into a taxicab below and is impaled on a rebar. To Peter's shock, he regenerates and stares in shock up at the building.

Claude joins Peter on the ground who angrily tells Claude that if he hadn't been able to regenerate he'd have died, but Claude is unrepentant, stating that if Peter hadn't been able to call upon regeneration he'd have been hopeless anyway and his death would've diffused the bomb. Peter tells Claude that he didn't clear his mind as Claude has been trying to teach him but rather just before he hit the cab, he thought of Claire and how sweet he found her. Peter realizes that by recalling how Claire made him feel allowed him to call upon her power and he needs to do that to access his other abilities, not forget those important to him. After realizing this, Peter suddenly starts frenetically duplicating many powers at once, including Isaac's precognition, causing him to see visions of himself exploding again. Claude knocks him out, ending his uncontrollable use of his powers and comments that "its a start."

Isaac paints Peter sitting next to the cab, half his limbs invisible. He calls Mr. Bennet with the news that Peter may be invisible. He asks Mr. Bennet what this means. "It means an old friend isn't quite as dead as we thought he was." 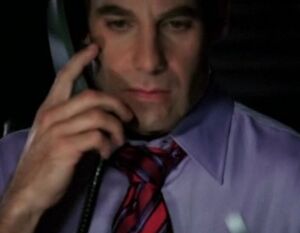 Nathan is revealed as Claire's bio-dad.

Hiro's father decides to make Kimiko his successor. Hiro awkwardly embraces his father and accepts ribbing from his older sister. Ando tries to embrace Kimiko as well, but she declines, giving instead a traditional Japanese bow.

As Micah calls for his newly exonerated mother back at their house, it appears that Jessica is now firmly in control and now Niki is trapped.

When Claire and Zach finally gets home, her mom chastises them for skipping school. Claire reminds her about the conversation they had about skipping school and going to the aquarium, but Sandra has no memory of it. A look of confusion crosses her face, and Claire realizes that her memory has been erased by The Haitian.

Meredith gets hold of her telephone and says her daughter is still alive. And on the other end is Claire's biological father — Nathan Petrelli.

"That was for the hair cut."

"I think he's been here this whole time. I've being painting him. Except no one can see him, like he is a ghost, or... invisible. What does that mean?"

"It means that an old friend isn't quite as dead as we thought he was."

"You threw me off of a thirty story building! If I didn't regenerate, I'd be dead!"

"You could've flown! Listen, if you hadn't worked this one out, you'd've been hopeless anyway. And I'd have defused the biggest bomb ever."

"Well, ever since I seen what she can do, I guess you could say I'm a... fan. She's really quite gifted."

"Yeah, I guess I have. I just couldn't get over those irresistible... talents of hers."

"For this you leave your job, take an unauthorized vacation. Gorge yourself on hamburgers and waffles."

-Claude after Peter figures out how to regenerate on his own.

"Should never have told him all those stories."

-A deluded Ando about Hiro's sister.