Echo DeMille was a seemingly ordinary mailman with the ability of sound manipulation.

Echo runs through an alleyway and behind a house, and when he can go no further due to a fence, turns around and faces a Doberman Pinscher. He throws down his mailbag and comments how cliché the situation is. He warns the dog to go away, but when the dog continues to growl he uses his ability to ward it away.

When the dog runs off, Echo is approached by a bald man with gray skin and another in a suit. The man in the suit explains that he is from a Company that looks for people like him and helps them learn how to use their special abilities. Echo explains that there is nothing special about him and that they have the wrong guy, and attempts to flee. However, Echo is quickly constrained by the bald man. Echo then uses his ability, breaking himself free from the Constrictor's grasp, and causing the man in the suit to bleed from his ears with severe pain. When the man in the suit pulls out a gun, Echo uses his ability again, this time nearly killing the man and sending the Constrictor to the ground.

As Echo runs off, the Constrictor gets up, grabs the other man's gun and shoots two shots in Echo's direction.

Echo DeMille arrives home, and searches his house for his girlfriend Gina. He find her in the bedroom, and tries to keep her from making out with him while explaining that he thinks he killed a guy, that he has an ability, and that they need to leave as soon as possible.

As Gina gets ready in the other room, Echo searches the bedroom drawers and locates a couple earplugs. He then notices the front door is ajar. Suspecting an uninvited house guest, he picks up a guitar and walks into another room to find their house cat. Echo continues into the living room and finds Gina being held by the Constrictor. Echo next uses his ability to free Gina, and then grabs the Constrictor by the throat and focuses sound waves into the Constrictor's ear, killing him. Thinking they are safe for now, Echo walks over and embraces Gina. Echo and Gina then both stare towards the front door as someone knocks on it three times.

As someone knocks at the door, Echo tells Gina to take his car and flee by herself to the cafe on Newburry, and if he is not there in 30 minutes to take off and keep driving. Echo also hands Gina a couple earplugs to use, saying he is going to tell these guys to get the hell off his front porch.

Back inside, Echo lets in two agents into his home. As they walk by the Constrictor's motionless body on the floor, the first agent says they just want to talk. Echo replies that instead they're going to listen and lets out a very loud scream.

Thirteen weeks later, Echo is bound and gagged in a Level 5 cell. Angela Petrelli visits Echo and shushes him.

Echo DeMille reads a letter and recalls how his girlfriend thought his ability was cool, and how he used it to harm several Company agents. Echo arrives at the café on Newburry, where he arranged to rendezvous with Gina when she fled their home. While hiding behind some bushes, Echo spots a couple Company agents watching Gina, so he signals for her to leave by mimicking their favorite song from their backpacking voyage through Thailand. After Gina leaves, Echo prevents the agents from following her by creating a "brown noise" and causing them to soil themselves.

Thirteen weeks later, Echo travels to his family's cabin on Lake Arrowhead, where he had arranged with Gina to eventually meet up. He thinks he spots Gina on the sitting at the edge of the pier, rushes to embrace her and gives her a kiss. However, he then realizes it's not Gina that he kissed, and uses his ability to render her unconscious and reveal her true appearance. Then, two Company agents in black suits come charging at him, and Echo dispatches them with the same type of sonic blast. Echo then faces off with Elle Bishop, who just misses him with a lightning blast. He is able to even take down Elle by absorbing her electrical energy and converting it into a super-sized sound blast. However, one agent is unaffected by Echo's ability, no matter how he uses it, and is able to capture Echo.

Later, in Echo's Level 5 cell, the agent that took him down visits Echo. An interpreter translates a sign language from the agent, telling Echo that the Company recruited him especially to take Echo down, as his special ability is that his "body absorbs all sound." Echo, however, hasn't given up, and promises himself to "go postal" when he gets out.

Noah releases the remaining Level 5 prisoners, and tells Echo, Danny Pine, and Eric Doyle that the first of them to kill Sylar will be guaranteed his freedom.

Later, Noah comes back to Level 5 to find Echo dead with his throat slit.

According to NBC.com's webisode character reference for Echo DeMille, he was born in San Diego and was raised in military bases around the world. He now lives in Los Angeles and works as mailman in the day and DJ at night. Shortly after becoming a mail carrier, Echo's power began to manifest. He met his current girlfriend, Gina, two years ago in a dance club. They fell in love and bought a house together.

According to Echo's Assignment Tracker 2.0 case file on Echo, he has two brothers and a sister, all of which have served in the military. His eldest brother was killed in battle; Echo and his younger brother often got into trouble. However, Echo cleaned up his act when he became a DJ, a career that earned him a level of notoriety in club circles. It wasn't until after Echo became a mailman that his power began to manifest. As a sound manipulator, Echo can "mimic and distort noise, replicate frequencies, and create sonic blasts of devastating proportions." Echo hides his ability from Gina, which causes a significant amount of cognitive dissonance. Echo's psychological profile also reports some aggressive behavior and "psychological inflexibility".

For Echo DeMille's original Assignment Tracker 2.0 case file housed at primatechpaper.com, see file C009, and enter the password EDgch49la. For a linked facsimile of the file, including full text and images, see here. 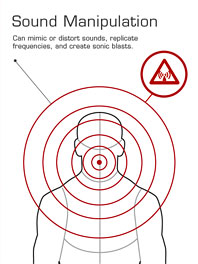 According to NBC.com's character reference, Echo is a sound manipulator. He can mimic or distort sounds, replicate frequencies, and create sonic blasts of devastating proportions. Shortly after becoming a mail carrier, Echo's power began to manifest. When his fight or flight reflex is activated, his ability to manipulate sound increases greatly. He can also absorb electrical energy and convert it on impact into a powerful sonic attack, although this can weaken him.

Echo apparently has substantial knowledge of the physics behind sound. He is able to create sounds of very specific frequencies, including the legendary "brown note", target specific areas of the human ear, mimic elaborate music, and even convert electricity into sound by acting as a "human telephone."

According to his assignment tracker file at primatechpaper.com, Echo's control index is 45%. His data analysis shows his biological level at 35, cerebral at 40, elemental at 75, and temporal/spatial at 25.

Please refer to Theory:Echo DeMille for fan-created theories and other speculation.