Penny Logan was a human agent of the Company. She was the daughter of Connie Logan and Julien Dumont.

Penny, a Company agent, pursues a man in Manhattan that Penny has been informed will emit nerve gas when he gets nervous and sweats. Penny blends into a crowd and follows him into an alleyway, where she manages to bag him with a taser before he can release a fatal dose.

Upon returning to Primatech Research, Penny cleans herself in the shower and her hair changes from black to light brown. Penny tries to "hit on" Thompson, Jr., who does not remember her even though they went on an assignment together to fight a Croatian who had a weather control ability, and ignores Penny until introduced to her by Penny's mother, Connie. Penny leaves with her mom down the hall, and rejects her mother's suggestion that Penny should improve her own appearance to attract guys.

Penny and Connie arrive at Bob's office, and learns from Bob that her request to be assigned a new partner has been denied. They then travel to Levittown to capture a teleporter. Penny and Connie follow Bob's plan to use the target's girlfriend to get close to him. When they spot the girlfriend leaving the target's house, Penny's physical form is altered by her mother such that she appears exactly like the target's beautiful girlfriend except for her clothing. Penny is able to impersonate the girlfriend well enough to convince the target to let her into his house. Then, Penny knocks him out with a powerful kick and prepares an injection.

After the mission is over, Penny tries but is unable to convince her mother to restore her normal appearance until the next morning. Penny then heads to the Company watering hole where Thompson, Jr. offers Penny--not realizing her true identity--a drink. Penny accepts, planning to eventually confront Thompson, Jr. with her true identity later. However, Penny gets drunk and wakes up the next morning naked in a motel bed beside Thompson, Jr., her appearance reverted to normal.

Penny, getting over the shock of waking up after a night with Thompson, Jr., gets out of bed, hurriedly dresses, gathers her things, and sneaks out of the motel room.

At Primatech Research, Penny practices shooting in the firing range. Thompson, Jr. approaches, and notes that he remembers Penny's name. Just when Penny gets her hopes up, Thompson reveals he still hasn't realized she was the one he had slept with the night before, and merely requests that Penny say "hi" to her mother for him. After Thompson Jr. has left, Penny is confronted by her mother, who gloats that she knows her ability allowed Penny to become closer with Thompson, Jr.

They walk through the halls, and arrive outside a Company work room. Penny watches through the room's window as a colleague helps him to discover that the person he made out with the night before resembles the teleporter's girlfriend, a known accomplice in the Company's database. When Thompson, Jr. rushes away, Penny has her mother quickly change her back to looking like the girlfriend, hoping to head Thompson, Jr. off before he reaches the girlfriend's home.

Penny, Thompson, Jr., and the girlfriend all arrive at the teleporter's home, and Thomson, Jr. ushers the two women inside at gunpoint. Penny explains what has happened, and pleads with Thompson to send for the Haitian and not her mother. However, Thompson, Jr. ignores Penny and has them both arrive to the home.

After being forced to tell her mother that her ability is valued, Connie turns Penny's appearance back to normal confirming her version of the events. After everyone else has left, Penny asks Thompson, Jr. if he is upset and learns that he likes Penny using her mother's ability, and they could have a relationship, with Penny using her mother's ability to appear as someone new to him every night. Penny considers next time, she could "keep the face, and lose the memories".

Penny is assigned to help bring down Echo DeMille. Thirteen weeks later, Echo is supposed to rendezvous with his girlfriend Gina. However the Company becomes aware of this and decides to put Penny on the case.

Echo travels to his family's cabin on Lake Arrowhead, where he had arranged with Gina to eventually meet up. As Echo makes his way to the cabin, Penny is there waiting on the pier, in her Gina disguise. Echo rushes towards Penny and the two share a kiss. However, he then realizes it's not Gina that he kissed, but Penny. He uses his ability to render her unconscious, revealing her true appearance.

Penny, Felicia and her mother are sparring in Primatech's training area when they overhear the arguments of Gael Cruz, Thompson Jr. and Bianca Karina regarding who could be aiding Evs Dropper's activities to undermine the Company from the inside. Penny sticks up for Thompson Jr., and makes the argument worse by suggesting that the human agents need to start protecting themselves against the evolved agents who are suspected of aiding Evs, much to her mother's shock.

Penny fights against Felicia in a human vs. evolved human brawl. When Felicia attacks with her disintegration touch, Penny neutralizes it by pinning Felicia's arm behind her back. Penny is rendered unconscious when Thompson, Jr. opens a canister of knockout gas.

Later, Penny, disguised as Donna, receives a text message from Evs, telling her where to be found. Thompson and "Donna" drive to a cabin in the middle of the woods, and Donna looks inside the house and sees three people. She tells Thompson to call Gael and tell him to bring "an army", claiming to know who Evs Dropper is.

Penny, disguised as Donna, looks inside Evs Dropper's cabin and tells Thompson to have Gael send everyone available.

When Connie is 22, she gives birth to Penny. Her father and Gael Cruz attend the newborn's bedside. Four years later, Penny attends her father's funeral.

At Evs Dropper's cabin, Gael orders Penny, disguised as Donna, and Thompson to retrieve Julien. They follow the rest of the vans until they reach an blockade of clones at a bridge. Thompson, Jr., "Donna", and the other Company agents then exit their vans to confront them. The clones on the road use explosive weaponry to take out Company vans on the road, and "Donna" and Thompson, Jr. head off the road into the woods to find Connie. 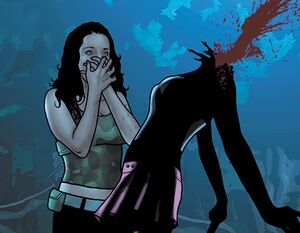 Penny is killed in front of her mother.

The partnership searches for their targets, but "Donna"'s exceptional vision doesn't seem to be working. After some searching, "Donna" is able to lead Thompson, Jr. towards Connie and the Julien clones. Thompson, Jr. shoots one of the clones, but Connie and the other clones get the jump on them and they end up all pointing guns at Thompson. Then, Thompson, Jr. is pistol-whipped in the face and he falls to the ground on his knees. He asks, "Are you insane?" "Donna", pointing her gun at Thompson, replies, "You have no idea".

Thompson, Jr., on his knees after being betrayed by "Donna", is shocked to find "Donna" is actually Penny in disguise. Penny explains that she is willingly aiding her mother in her efforts as Evs Dropper to destroy the Company that took her father from them. Upon revealing her true appearance, Penny explains she has been posing as Donna for the last few hours, ever since Donna was still in the shower at the hotel. Penny, bitter and vengeful towards Thompson for seducing and having sex with her, poises to kill Thompson, her gun at his head. Connie alters Penny's face to one which Penny says will be the last thing Thompson sees. Suddenly, the Kill Squad opens fire and a bullet hits Penny in the face, blowing her head off, and killing her instantly.

According to her mother's assignment tracker, Penny was the person to turn her mother in to the Company. At the time, Penny was already a highly-decorated field agent in the Company. Penny believed that her mother would be isolated by the Company as she found her ability to be ethically offensive. However, the Company instead made Connie into Penny's new partner over her objections and their partnership has been a success thus far, making Penny "an unparalleled candidate for infiltration assignments."