Okay who else was seriously disappointed by that?????????

This page needs to be organized

Its gotta be said 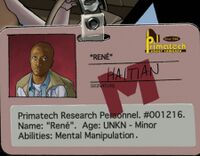 "René" signs his name as "Haitian".

Angela: "Poor girl. How's she holding up?"
Bob: "Birthday cake? Really, Angie?"
Angela: "It was the last one they had."


This dialogue is inconsistent and somewhat confusing. What is it supposed to mean? Cake seems like a pretty common birthday treat to me. And how do you jump from the thought pattern of "why did you bring cake" to that of "it was the last one left"? --Boycool Two little mice fell in a bucket of cream. The first mouse quickly gave up and drowned. The second mouse wouldn't quit. He struggled so hard that eventually he churned that cream into butter and crawled out. Amen. 09:06, 11 June 2010 (EDT)