I was doing some searching around the AT site, and I discovered that the profile picture and ability picture for file A015 seem to be about Chris Coolidge. The profile image for A015 is definitely Chris. More interestingly, the ability image for A015 says "cerebral capability:biological empathic manipulation". 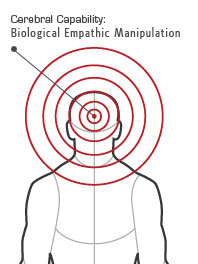 It's even more interesting to note that Chris's AT page (P013) actually lists his ability as "empathic manipulation". However, I can't access the full profile for A013, or see any profile where the cerebral capability image above is used.