Here are the lyrics to the Ritchie Valens song:

Well, darlin', now that you're gone I don't know what I'll do All the time and all my love for yo-ou-ou

The first thing I thought, when I saw the phone-pic of Evsdropr, was our old friend Paul E. Sylar from In His Own Image and One Giant Leap.

Here they are, side-by-side. The shadowy picture also reminds me of some of the old Nosferatu/Sylar inferences. I'm gonna do a little Nosferatu image surfing, and see if they have any that match that same pose....will post if I find anything. --HiroDynoSlayer (talk) 04/10/2008 14:35 (EST) 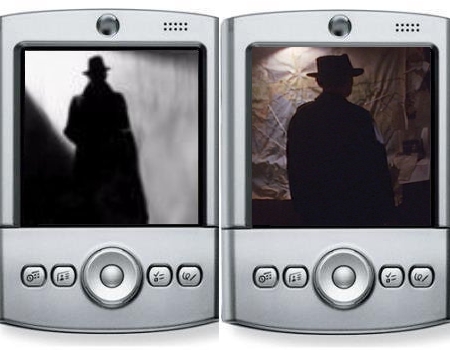 So evs sent out two text messages on the same day? One said "I'm a small village located in Peoria County, Illinois." and the other said the same thing but with a missing apostrophe in "I'm"? Odd. -- RyanGibsonStewart (talk) 19:57, 10 April 2008 (EDT)

After looking at the list on WP, I'd narrow it down to the following that could be names: Edwards, Laura, Hanna City, Dunlap, Cramers, Smithville, and Holmes Center (most of these could be common last names). Something about Komatsu Dressen strikes my attention; Komatsu translates to small pine, so I don't know the relevance of this. My two cents.--Bob (talk) 04:19, 17 April 2008 (EDT)

True, but I believe it does provide the answers to these two clues. First clue was a reference to the song 'Donna'. Second clue was a reference to a village in Illinois. The subject of the GN was 'Donna Dunlap'. So her first name fits the first clue. And since Dunlap is a village in Illinois... her second name fits the second clue. As a result, I don't think that there's any further information to be gained from these two clues. If she's not evs (which it seems she's not, since she talked on the phone with him/her) then it would appear that she was at least the person that the clues were trying to point us towards. Or she'll 'become' evs sometime in the future, who knows. --Maelwys 09:37, 17 April 2008 (EDT)

Right, but I think the continuing mystery really is that evsdropr said "I'm a small village...". If evs is not Dunlap, then who is this message referring to? It's either a more mysterious clue than originally thought, or it's a poorly chosen pronoun. My vote goes for the latter. -- RyanGibsonStewart (talk) 13:50, 17 April 2008 (EDT)

evs didnt do that when the message was first sent i tried to add a note field and i had just started to contribute so it didnt work. the apostrophe was also me [blushes]. Sorry to cause confusion everyone [blushes again]. Shoyru1177 (talk) 06:41, June 20, 2008

Someone mind posting the transcript of the phone call between Donna and Evs Dropper? --Snow Leapord 10:28, 22 April 2008 (EDT)

At the bottom of this page currently is text talking about evs sending a message to you if you sent him/her a message on 9thwonders.com about solving the message from Sabine. I sent in the decoded message and never received anything from evs. Did everyone else receive this message? I'm not saying it didn't happen, I was just wondering if this was one instance or am I the only one that didn't receive a message? -- Heroes360 20:13, 12 June 2008 (EDT)

I have solved the logic problem emailed on July 2, but I can't describe well how I got the answer except to scan my grid that I made. Bottom line, the passenger flight in on runway 3, therefore the flight should be ok. Anyone who would like to pass that along to evsdropr it would be appreciated! Disney42 19:20, 2 July 2008 (EDT)

I am one year younger than Ben Franklin was when he retired from printing.

Then the article explained:

Benjamin Franklin retired from printing at 42, so 41 is the answer to the first riddle.

The meaning of the first riddle is unknown.

A while ago my e-mail address changed, so I haven't got the latest updates. I now can't sign up as they require a cell phone number, which I don't have, so does anyone know if there is a way to sign up without one? -Lөvөl 15:47, 27 August 2008 (EDT)

So there's a new message tonight:

We're pleased to give you advance notice of a new chapter in Heroes Evolutions, to be formally announced next week. While many of the characters will be familiar to you from the show and Evolutions, the game format will be something new and fun. It's time for you to step out of the shadows and take your place in the Heroes Universe!

You can expect to be contacted about twice a week as part of the game. Feel free to update your contact preferences at any time:

It's definitely not a message from Evs, and not a message from Liza or Fallon or anybody else within the show. I don't think it should be included on this page. I will, however, add it to the main page. -- RyanGibsonStewart (talk) 22:52, 31 October 2008 (EDT)