So ... do we include the new paintings from the Linderman Archives on Isaac's paintings and Prophecy or not? I think they'd be fine to include as long as we are clear that they come from the ARG, and not the show. Maybe they could even have their own separate section and gallery, under Notes, to distinguish them. We haven't really talked about whether or not Heroes 360 material should be considered canon or not, but we've been putting most of it in Notes for now (insert usual statement about NBC.com's persistent dumb errors here).--Hardvice (talk) 18:37, 24 February 2007 (EST)

My first reaction was to take them out of "Isaac's paintings" ... but since some are definitely by Tim Sale (and they all appear to be by Tim Sale), I'd say it's safe to include them in the category, canon be damned. — RyanGibsonStewart (talk) 08:12, 26 February 2007 (EST)

Isaac's paintings back at his apartment

I would love to show a T-chart (a 2-column table, for those of you who aren't elementary school teachers) of Isaac's paintings and a picture of the scene in which it was realized. For instance, something like this:

It's rough, but you get the point ... So my questions: Any thoughts on how to best present this? Any ideas where a table like this should go? - RyanGibsonStewart (talk) 22:31, 1 December 2006 (EST)

Okay, I updated the gallery to show Isaac's prophecies being fulfilled. I think it's a cool concept, even though the gallery looks a little rough right now. Many of the pictures needed to be reformatted/resized so they look pretty. I tried to keep as much of the original text as possible. We need some images that I know are out there, if someone could be kind enough as to grab some of the following screen caps:

And if anybody can find these, too:

Another issue: some of Isaac's paintings won't be "fulfilled" (some of the symbol paintings, the sketch of the yellow pom pom girl, the unfinished menacing shadow pic, the assembled paintings). Should these go in a gallery, and call the new table "Prophecies/Fullfillments" or something? And finally, is this the best order for the paintings/pictures? I simply kept them in the same order the gallery had. They seem to be somewhat chronological, but not entirely. Any thoughts? - RyanGibsonStewart (talk) 02:19, 2 December 2006 (EST)

Should we also add a shot of Isaac's first painting (that we know of) that foretells the future? The one he drew in the graphic novel Isaac's First Time showing the woman getting hit by a bus. If so, anyone got a shot of it? (Admin 13:50, 11 December 2006 (EST))

There is so much white space on this page. Is there a way to fix it without having the gallery run into the side bar? Ideas? - RyanGibsonStewart (talk) 00:03, 9 January 2007 (EST)

So Tim Sale posted his paintings on comicworldnews, but they're black and white. I didn't upload them over the screenshots because I like the colors. Puts us in kind of a pickle. Do we include the B&Ws on this gallery, upload them over the color versions, or include them on the forthcoming Dead Isaac Series? Personally, I'd like to keep the gallery as is (unless Tim posts more, of course), and include the B&W versions on the new page. — RyanGibsonStewart (talk) 18:17, 6 March 2007 (EST)

Is there any evidence that Isaac actually painted these? I know this is speculation, but from what was observed by Hiro, Isaac's abilities were stolen by Sylar. Peter doesn't know how to paint, but he had the ability to finish the painting with Jackie dead.

So take it for what it's worth. I dunno if we should remove them from the gallery since they're not mentioned in the article. --Baldbobbo 14:41, 7 March 2007 (EST)

when issac lifts his sketchbook there is a strange sketch/plan underneath. sketch
here are some other caps of paintings that aren't in this paintings gallery. if some one can use them, then please do.
hiro saves girl
sylar's first painting
issac dead
--Elphantasmo 12:54, 24 April 2007 (EDT)

According to Tim Sale, the series of eight might not be Isaac's paintings, but Peter's paintings (link). We should probably remove the images from this page until the artist is confirmed. Actually, Noah says that they're from Isaac, so we should probably leave them until the artist's identity comes into doubt. Innocent until proven guilty. -- RyanGibsonStewart (talk) 00:19, 1 November 2007 (EDT) 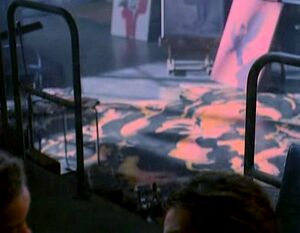 If you watch Don't Look Back in Isaac and Simone's first scene and look into the background, you can see one of the Symbol paintings. Therefore, the Symbol paintings are actually done by Isaac. I'd provide a screenshot, but my media player crashes whenever I try. --DocM 15:51, 22 March 2008 (EDT)

It's long and a little confusing. It's also out of perspective with the rest of the article. Anyone have any ideas as to how to rework it?--SacValleyDweller (talk) 00:54, 30 April 2008 (EDT)

The notes section contains a comment about "these paintings". Is the comment referring to the above paintings or the ones below? It's not very clear... Also, does the comment mean Donna's death was likely drawn by Sylar???--MiamiVolts (talk) 16:11, 1 May 2008 (EDT)

Why was this moved?

Why was this page moved to "Isaac's art"? Everything on here is (or should be) a painting. We have a page about Isaac's sketchbook for any sketches he's done, and all other drawings by Isaac have been part of 9th Wonders!, I believe. This page is not about all of Isaac's art, just his paintings. -- RyanGibsonStewart (talk) 02:35, 13 February 2009 (EST)