Do these belong here? There's a pretty good chance that they're not on the list, either because they haven't contributed DNA to the HGP, or because Chandra was just plain wrong about them. (Of course, Chandra has his own DNA samples from several of them.) The algorithm is a pretty new discovery, and most of these subjects predate even Activating evolution. We can't even confirm that they really are evolved humans, let alone that they're on the list or should be on the list.--Hardvice (talk) 15:56, 4 April 2007 (EDT)

...is, I'm guessing, a fansite. At the very least, it has some problems: Eden's on there as "Eden", not as 'Sarah Ellis'. Claire's on there, and shouldn't be, if Eden succeeded in her mission. There's also the matter of Hana's and Meredith's locations, which are up-to-date even though Hiro isn't, and the fact that Sylar's recent victims are marked as deceased already, except for Dale. Also, it's a Christmas Island domain (.cx) and doesn't appear to be in any way affiliated with NBC or Global. Cool, though.--Hardvice (talk) 12:50, 26 April 2007 (EDT)

Do we need this section? I think List of evolved humans is sufficient, and as the show grows, this section will be pretty long, almost to the point that it's more this section than the actual list.--Bob 04:53, 13 August 2007 (EDT) 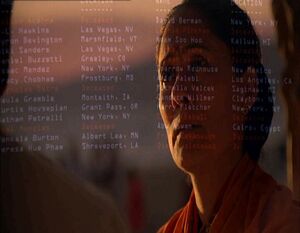 I just watched Season 1 dvd and in the beginning of Fallout, when yo pause at the right moment, you can read Diego's full name: Velasquez -- Carl Jung

After Sylar awakes from being knocked unconscious by Mohinder (after his fight with Peter at Mohinder's apartment), he is angered that he canmnot access the list. But didn't Mohinder show him the list earlier, right before he used the curare on Sylar (prompting Sylar to call Issac)? Since Sylar had Charlie's power, shouldn't he be able to access the entire list from memory? --Stevehim 21:18, 8 November 2008 (EST)

Sylar's list in Villains included the names and phone numbers of several people:


Should this be mentioned on the page? Brian, James, Charlie, and Sparrow are seen on Chandra's list. Presumably, Sylar got the other names from Chandra as well. How should they be incorporated on the page for the list? Lindsaynickel 06:22, 15 November 2008 (EST)

Shouldn't it be in the trivia section that Candice is mentioned on the list, even though it isn't her original name? If Chandra did map these people by genes, he should have come up with Betty, not Candice. --Billylemmon 14:53, 11 February 2009 (EST)

I just watched all of Season 1 over again, and I distinctly remember Mohinder saying "Your brother is probably the most important person on that list." Why isn't Peter on it? o.o LimaBean 11:49, 13 July 2009 (EDT)