For an episode-by-episode summary, see Chandra Suresh: Season One History.

Theorizing that evolution still affects human species and is granting them extraordinary abilities, Chandra leaves his university in India and travels to New York in search for the clues which can prove his theory. He makes friends with his neighbor, Eden McCain, who is in fact an undercover agent from a mysterious organization known only as "the Company", assigned to watch Chandra. He meets a watchmaker, Gabriel Gray, whom he believes to be an evolved human, and runs some tests on him, but fails to detect his ability of intuitive aptitude and gives up on him. After Gabriel discovers his ability on his own and learns to use it offensively, he returns to Chandra, and he accepts Gabriel's offer to help him find other people with abilities. Eventually, Chandra learns that Gabriel, who has adopted the alias of Sylar, is responsible for deaths of other evolved humans, and is ultimately killed by him.

Mohinder tells Nathan that he once put all his faith in Chandra's research, but never got anywhere until he thought for himself. 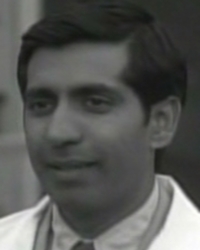 Mira Shenoy shows Mohinder the box of Chandra's work from 1960s and says she is disappointed he hasn't thrown it away. She warns that every time he studies his father's work, it leads to a dark place. Mohinder admits that she might be right and places the box in the garbage.

Later, Mohinder gets up to retrieve Chandra's box and then takes out a spool of film. He plays it and watches his father make an entry from the Coyote Sands Relocation Center on March 5, 1961. Chandra talks of a small but measurable force that is dangerous around large number of special persons. It increases exponentially and seismic energy is radiating from a pregnant woman. Chandra plans to document the birth of the child. As he makes the recordings, tremors shake the compound. Using the equations on Chandra's chalkboard in the film, Mohinder assembles a compass.

When Mohinder arrives to the carnival, he discusses with Joseph Sullivan Chandra's theory.

In an interview, Mohinder speaks to the reporter about his father.