It should be noted that with the exception of Hiro, almost everybody in the list was located in the United States.

I'm curious as to what order these people are listed in. It's not alphabetical, it's not geographical, and it doesn't appear to be in order of age. Any ideas?

Great work on compiling the names! ... I don't have access to doing screen shots, but I remember the episode last week showing more names after Hiro's ... Does anybody have a better list (or a better screenshot?), or is this just minutae that can be left alone... Ryangibsonstewart 15:34, 28 November 2006 (EST)

Is this list really a list of identified evolved humans, or just suspected? My argument is that Sylar appeared on the list, and Chandra turned him away. Plus, people appeared on the list before their powers appeared ... Any thoughts? Ryangibsonstewart 22:58, 28 November 2006 (EST)

Should there be a list of people that are mentioned as being on the list but their names are not shown? (note: not who could be on the list, but who is on the list) Level 13:38, 15 December 2006 (EST)

Sounds ok to me. I am assuming that the list actually represents everyone with special powers. In that case, it would be everyone who appears in Category:Evolved Humans. Other than Claire Bennet, I'm not sure who else was mentioned as being on the list (to date). --Orne 14:13, 15 December 2006 (EST)

We can't tell who all is listed offscreen, of course, but I thought it was interesting that Nathan is listed, but Peter is not.--Hardvice (talk) 14:28, 15 December 2006 (EST)

It's interesting, too, that Hiro and some dude named Abu are the only ones not from America. (And that all the states are abbreviated except for Sparrow Redhouse - by the way, what a name!) - RyanGibsonStewart (talk) 15:17, 15 December 2006 (EST)

Well, if Mr. Redhouse is an American Indian, it may be that they are referencing a reservation in New Mexico, which would be outside of the jurisdiction of the US government (and possibly not have a registered town name). Checking Google for a bit, Redhouse is a valid last name for the Navajo Council, New Mexico. --Orne 15:26, 15 December 2006 (EST)

The new sections seem a little redundant. It's pretty easy to tell who we've seen (they have links) and who is dead (they're in red) already. Also, as written it's in the wrong person and perspective.--Hardvice (talk) 13:17, 16 December 2006 (EST)

Agree. Aside from the formatting issues, it's good information. However, we've already seen it in the table above. It's basically just taking the list and putting it into a different format. I think it's unnecessary. - RyanGibsonStewart (talk) 13:21, 16 December 2006 (EST)

We can't really assume any of the dead people on the list are Sylar's victims. Why not? Because Mohinder found the list in his father's office in India. That means he more than likely hasn't updated that copy since he left for New York -- before there even was a Sylar. We know it doesn't update itself (Charlie is still listed as alive). It's possible Chandra stored it on a remote server, but there's no evidence to support that conclusion, and in any case, several of Sylar's victims have been killed since Chandra was murdered.--Hardvice (talk) 14:39, 16 December 2006 (EST)

Agree - I think we're tending to speculate a lot about the list. In the end, we know very little about it — we know that it contains a list of suspected evolved humans (and we know who some of them are). We know that Chandra kept this list, and so it's probably about 6 months old. That's really about it. You make some great points about including the dead people, Hardvice. I think we need to remove all speculation. (One note - didn't Mohinder find the flash drive containing the algorithm in the lizard's aquarium - meaning in New York? I know he looked at the algorithm in India, but I assumed that was from the flash drive. In the end, it makes little difference because of the other points you made - I just need clarification.) - RyanGibsonStewart (talk) 15:46, 16 December 2006 (EST)

He did indeed find the flash drive with a copy of the algorithm (and rpesumably the list) in New York, which means Chandra had a copy with him (no big surprise, since he was contacting people from it). However, the algorithm which Mohinder was unable to unlock and access the list from was already running on Chandra's desktop computer in Chennai when Mohinder returned to his office, so that one is at least 6 months out of date. Mohinder never got the password prompt with the algorithm he retrieved from the flash drive in New York (at least not on screen). It's possible that now that he knows how to unlock it, he's done so with the New York copy--I'm sure Chandra would keep that copy up to date up until his death. However, all of Sylar's killing about which we know (with the exception of Brian Davis and the guy in Turning Point) occurred after Chandra's murder, so even an updated list wouldn't include them. Another interesting point: shouldn't the Chennai copy of the list still contain Claire's name, even if Eden was able to expurgate it from the New York list? Hmmm.--Hardvice (talk) 17:45, 16 December 2006 (EST)

I removed the note about Claire being on the list as Claire Gordon. First, there's no indication that's her birthname. Regardless, she was on there as Claire Bennet, or at least as a name that Dr. Suresh would link with Mr. Bennet. On top of all that, Dr. Suresh had a picture of her from her yearbook, so he definitely knew her current name. - RyanGibsonStewart (talk) 07:18, 30 January 2007 (EST)

I recall Mohinder stating that Dale was found through the Human Genome Project via her donating blood or something. Even though Wikipedia does not seem to describe that the HGP operates in this fashion -- maintaining a full searchable database of DNA of so many people -- if this is the method used in the story, then a person's birth name is probably not that relevant as whatever name is used at the time their DNA is entered into the HGP. In Claire's case, it seems to be well after her birth. -- Glue 22:11, 28 February 2007 (EST)

Wouldn't there be '37' names on the list, as Bennet is supposed to have forced him (I assume via The Haitian) to remove Claire's name? Also, there seems to be an attempt over on "9th Wonders" to form a list based on how many people we know to have powers. --Yoshie (talk) 10:37 EST, 30 January 2007 (EST)

If Mr. Bennet did succeed in getting her name off of the list, then yes there originally could have been 37 or more names on the list. "The list" in it's current form, however, apparently only contains 36 names. The list isn't a complete list of everyone with abilities it seems but rather just the ones Chandra identified through his research up to the point where he was killed. (Admin 10:40, 30 January 2007 (EST))

It's very likely that Bennet did succeed, as Sylar has been working off of the map he stole from Chandra. Sylar did not find out about Claire until the news report about her saving the fireman from the train. Also, considering the scope of metahumans who have been identified and Mohinder's speech last night, I got the impression that we were ment to assume that there are only 37 total metahumans (at least for now). --Yoshie (talk) 10:45 EST, 30 January 2007 (EST)

Claire could have been removed, and there's no reason to suspect Sanjog's on the list apart from the fact that Chandra knew he was an evolved human. The Brian Davis/David Berman thing could be a mistake. That drops us down to 38 (maybe), but that's still too many.--Hardvice (talk) 15:18, 30 January 2007 (EST)
If you exclude those who are listed as Deceased on Chandra's list (not including those who are known to have died after the list was created), it is less than 36. Perhaps Mohinder said this due to the fact that he's not seeking out dead people.--Baldbobbo 21:31, 31 January 2007 (EST)

The easiest resolution may be that Mohinder is not counting the people on the list who are known to be dead and there are some additional names on the list that we have not seen. --Ted C 16:51, 1 February 2007 (EST)

Ok, so if all the people Mohinder mentioned were on the list, along with transcripts of it, in Godsend, there would be 39 people (this does not include Gabriel Gray or Brian Davis since there was no mention of them nor were their names printed anywhere...yet). This is strictly from printed text and dialog from Mohinder. Now, as of The Fix, we now know that a few of those people are dead, including Sara Ellis. So, eliminating those deceased would give us 26, again excluding Brian Davis, Claire and Sylar.

So, Mohinder tells Nathan that his father compiled a list of 36 individuals with the genetic marker. Now prior to this episode, we know that there are 39 individuals either verbally or textually proven to be on the list. This is contradictory, so we have to make some assumption. 1) Production/writing error, which is possible, or 2) the more likely case, that Mohinder excluded those he knew to be deceased (somewhere along the line), which means there are 10 more names the writing staff can create.

I'm tired of looking into this, but since there was a specific number mentioned by Mohinder, along with names we definately know of being on the list, either referenced by Mohinder or shown in transcript, it seems that some count needed to be made. One thing that is mentioned above, however, is the mention of people who are noted in files by Chandra. This would include Brian Davis and Sanjog. Although these are people that Chandra is aware about (as are the people on the map), we are not definitely sure that their names were produced on the list from the blood samples donated to the HGP. Claire's name was on it, but it was removed from Eden (Six Months Ago). Since Mr. Bennet didn't receive any phone calls from Mohinder about Claire, I think it's safe to say that Eden was successful in removing the name from the file Chandra had in Madras.

Notes on the cover...

The list was seen very briefly when Mohinder pulls the post-it note for Zane. 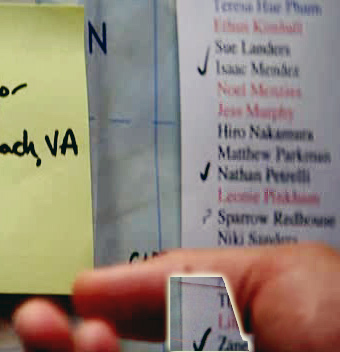 Known characters on this portion of the list: Issac, Hiro, Matt, Nathan, Niki Conspicuously absent: Peter (list is alphabetized by last name, so he should be right under Nathan)

I remember hearing in an interview from one of the writers that Hana and Sparrow would be featured in the show eventually. Perhaps this is why Sparrow has a question mark. --Bob 23:11, 15 February 2007 (EST)

There is a Heroes "are you in the list" T-Shirt on sale in Wal-Mart. From what I saw, the names do not have anything to do with the list in the show