Hi, I'm Mohinder613! I’m a writer and a Heroes fanatic, so Heroes Wiki is a perfect fit! I’m obsessed with Mohinder, and if you can't figure out why Mohinder613 is my user name, then visit the Mohinder's apartment page.

Mohinder’s introduction was unique from our other heroes’ origins. While we followed the other characters through their discoveries of their miraculous abilities, Mohinder was not only one of the few characters without any superhuman powers, but he was also one of the only people that knew what was going on with them. In a completely ordinary world, what chaos would arise if no one could explain why an ordinary cheerleader from Texas could run into a burning train car and come out unharmed, or why a normal Japanese office worker could bend time and space? This was Mohinder’s mission: to make sense of a senseless world. However, from his humble beginnings driving a New York taxi, to his revenge driven quest to make his father’s killer pay for his sins, we began to see that there was so much more to him than just a genetics professor with perfect hair, we began to see the many sides of Dr. Mohinder Suresh.

There was no possible way that he could have known that five words could change his life forever.

That was it. Never again would Mohinder have the luxury of a normal life. His quest had begun, and his new life was just beginning. Did Mohinder wholeheartedly believe in his father’s theories? He did enough to travel half way around the world to prove them right. Maybe it was an attempt at closure; maybe he felt it was his destiny, but whatever the reason, when traveling to New York he played a large part in giving our evolved humans the answers they would need to save the world.

Wait a minute. Is that Peter getting into his cab? What would have happened if Peter Petrelli never did meet the taxi driver whose poetic speech about natural selection inspired him to, well… jump off a building? Without Mohinder, Peter might have had one less hospital bill, but for Peter and his brother Nathan, everything turned out just fine…until his brother decided to start abducting everyone with special abilities despite his own gift of human flight, but that’s another story.

After Peter left, Mohinder had one last fare: the man with horn rimmed glasses. Though Mohinder did not know it at the time, this man represented a company whom would play an important part in Mohinder’s journey. Disturbing Mohinder by talking about personal information no one except a “company man” would know Mohinder’s reaction was simple: run. This was the doorway for antagonists to invade Mohinder’s simple mission to find his father’s killer.

The mystery of his father’s death was slowly unraveling as Mohinder and his newfound friend Eden McCain continued following clues that led to Chandra’s patient zero, a man named “Sylar.” Their quest led them to his actual apartment and there they found a map of people that were being targeted by our favorite guy in a black trench coat and baseball cap, Sylar. One such person was Nathan Petrelli, and while we knew him as the flying brother of Peter Petrelli, Mohinder and Eden knew him only as “that guy running for congress.”

Getting ready to leave for Las Vegas, Nathan was not happy with the fact that right out the open, some nut job found him and rambled on about teleportation and spontaneous regeneration. Mohinder was humiliated, and realized that he was turning into a person he never thought he’d be like –his father.

There was a time that he had warned his father about becoming a laughingstock. There was a time that he had thought of his father’s theories as fantasy. That time had passed. Never in a million years could Mohinder even dream that this would be where he would end up. Being looked at in the same way that his father must have been seen, Mohinder’s eyes were opened, and he began to doubt his own sanity. What was the real reason he came to New York?

Arriving back at his apartment, he recounted the events of the day for Eden who was less than sympathetic, asking him how he expected Nathan to react. Mohinder soon forgot about his humiliation, though, when he opened a package that had came for him while he was gone, to find his father’s ashes. The real reason he came to New York shown itself bright in Mohinder’s mind. The relationship shared by he and his father was not ideal, and now that his father was gone, that could never change. 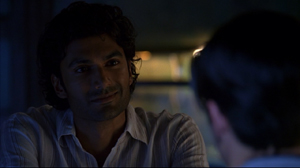 It was after his brother received a visit from a Dr. Suresh, that Peter decided to find Mohinder to ask him the questions that were haunting him. However, lack of evidence that he had any special abilities, led Mohinder to believe that he was crazy, rather than super powered. Before Mohinder had the chance to leave for India, Peter convinced him to visit a painter, Isaac Mendez. Isaac didn’t let them in, due to being high on heroin, and on the subway back things just continued to get stranger. All of a sudden Peter began shouting, and when questioned by Mohinder he said a man named Hiro Nakamura, stopped time and told him to save a cheerleader! After that, Mohinder was convinced that Peter was crazy (Can you blame him), and left for India after telling Eden goodbye.

“Fate can find you anywhere…”

Returning back home to India for his father's funeral, Mohinder decided to leave behind the impulse of finding answers, and get back to the ordinary life of a genetics professor. Being reunited with friends and even his old girl friend Mira, Mohinder began to feel that his ventures in New York were ridiculously unnecessary, and was feeling at home and at peace. However, after receiving his father's old office, strange dreams began to haunt him about his past. Finding that his first dream was far from ordinary, a vision of the past was right before his very eyes.

Watching an argument that he had had with his father, he remembered every detail vividly.

Despite his son's wishes for him to stay in Chennai, Chandra knew that in order to continue his research, he had to go to New York.

"Younger Mohinder" did not care, however, about his father's research as much as he did his father's sanity. After telling his father that he was chasing a theory that was pure fantasy, Chandra told him that all that was important was that the world knew about his findings. The heated argument went on, and neither father nor son was convinced of the other's claim. After all was said, Mohinder watched his younger self walk away angrily.

Then, suddenly, Mohinder's surroundings changed, and he was watching his mother and father talk outside. Mohinder listened as his father admitted that his son had a point. However, Mohinder's mother told Chandra that she knew that he would regret not going to New York and that it would eventually consume him and everyone around him. Chandra said that he should try to stay for Mohinder's sake, but Mohinder's mother asked him why, saying that Mohinder would never take the place of 'her' in his eyes. As Mohinder watched, a soccer ball rolled towards him. After picking it up, Mohinder spotted a boy whom he questioned about who he was and what he wanted. The boy pointed to the ball in reply, and after throwing it to him, Mohinder woke up, behind the desk in his father's office. Realizing that it was just a dream, he looked at the computer screen that had some sort of code on it. Earlier, when Mohinder had pressed a button, a question came up on screen.

"ARE YOU SURE YOU WANT TO QUIT?" the bold letters taunted as if referring to so much more than just a computer program. However, Mohinder ignored the question; he had enough for his mind to argue about.

But it was later, when going to see his mother that real questions began to show their selves. There was something more to his dream. It all meant something, and Mohinder was determined to figure out what that was.

"Let me ask you something, Mohinder. Do you ever get the feeling like you were meant to do something extraordinary?"

"I’m driving a cab, you may have noticed."

"I’m a natural progression of the species. Evolution is a part of nature. Nature kills, simple, right?"

"What you’ve done is not evolution, it’s murder. What I am doing is revenge. Now I can finally fulfill my duty as a son."

"So, now that you know about them what will you do?"

"Find them. Tell them who they are if they don’t already know. Warn them of the dangers they face."

"Not here, no. Some other part of the world, yes. A global event. Makes one appreciate just how small our planet really is. We’re all quite small really, aren’t we?"