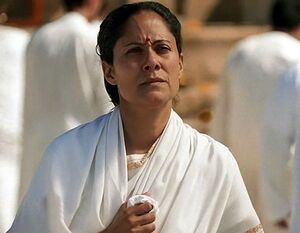 Mohinder returns home to scatter his father's ashes in Kanyakumari, India, with his mother. Later, he has an unusual dream about his parents. In it, his mother convinces her husband Chandra, who is having second thoughts, to go to New York to pursue his research. She tells Chandra that Mohinder will "never take her place" in Chandra's eyes.

At her home in Madras, Mohinder questions his mother about the dream. She admits that the conversation he saw did take place, and that she did persuade her husband to go through with his plan. When he asks whose place she meant Mohinder would never take in his father's eyes, she tells him he had an older sister, Shanti, who died when she was five and Mohinder was two, and that his father loved her very much because she was "special".

Mohinder's mother tells him that she heard from Mira that he turned down the job offer and is returning to New York. She tells him that Chandra didn't tell him that he succeeded in finding the evolved humans because he wanted Mohinder to live his own life. Mohinder tells his mother that he's going to find them and tell them who they are and warm them of the dangers. She worries who will protect him.

Mohinder's mother is in Chennai, India. with Molly. Molly refers to her as "Grandma Suresh". She tells Molly that the girl used to be covered in dark, but is now the opposite, and she also reminds Molly that America is her home. She notices Micah and his group and tells Molly that she has an admirer. When Molly refuses to help Micah, Mohinder's mother tells her that God teaches us to help our brothers and sisters, and then leaves to go prepare dinner.

Molly Walker asks Tommy Clark to send her to Chennai, India, so she can tell Mohinder's mother that Mohinder didn't have anything to do with the terrorist bombing at the Odessa Unity Summit.