Adrian Pasdar is the American film and television actor who plays Nathan Petrelli. He also portrayed Future Sylar in Five Years Gone, as well as a shape shifted Sylar in 1961, An Invisible Thread, and several episodes of Volume Five.

Adrian has been acting since the 1980s. He has appeared in several television prime time shows such as Desperate Housewives and Judging Amy. He can also be seen in numerous films, such as Secondhand Lions, Carlito's Way, Top Gun and Near Dark. In the mid-90s, he appeared as the title character in the short lived TV series Profit. Adrian also directed, produced, and wrote music for the 1999 film Cement. He also co-wrote and co-directed the musical Atlanta.

Following Heroes, Adrian went on to voice superheroes in several television series, including "Hawkeye" (in The Super Hero Squad Show), "Captain America" (in Black Panther), and "Tony Stark" (in Iron Man and Ultimate Spider-Man). Adrian also had recurring roles on Castle and The Lying Game.

Adrian has appeared with other Heroes cast members in Shadows of Desire (with Richard Roundtree), Carlito's Way (with Brian Tarantina), The Lost Capone (with Eric Roberts), Mysterious Ways (with Link Baker), Judging Amy (with Erick Avari and John Prosky), and Castle (with Matt Bushell and Stana Katic). The Geffen Playhouse production of his musical Atlanta featured Leonard Roberts. 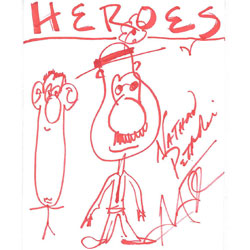 Adrian Pasdar drew this picture of his character in order to raise money for the Pediatric Epilepsy Project.
Retrieved from "https://heroeswiki.ddns.net/index.php?title=Adrian_Pasdar&oldid=5069"
Categories: