Milo Ventimiglia is the American film and television actor who plays the role of Peter Petrelli.

Milo has starred both on the small screen and on the silver screen. His most notable television appearances are Gilmore Girls, American Dreams, and This Is Us. In films, he can been seen in Stay Alive, Cursed, Pathology, Rocky Balboa, playing Sylvester Stallone's son, "Rocky Jr", and Armored. He appeared in Gilmore Girls with Brian Tarantina, Riki Lindhome, Mark Colson, Ethan Cohn, and Cristine Rose; in She's All That with Clea DuVall and Michael Milhoan; in Robot Chicken with Breckin Meyer and Seth Green; in Promised Land with Eugene Byrd; in CSI with David Berman; in Opposite Sex with Brian Kimmet and Rena Sofer; in American Dreams with Matthew John Armstrong; in Dirty Deeds with Michael Milhoan; in the broad comedy That's My Boy; and in Pathology with Alan Blumenfeld. In 2009, Milo acted in an episode of the web series Cinemash, in which celebrities parody their favorite film roles.

Milo voices the character "Wolverine" ("Logan") in the television series Iron Man, Wolverine, and Blade. He also does the voice for a playable character in the video game X-Men: Destiny. Additionally, he appeared as "The Ogre" in Gotham and as "Spider-Man Noir" in TV's Ultimate Spider-Man. Milo has also acted in a number of commercials, including ads for Mountain Dew, T-Mobile, Estée Lauder, and Apple iBook. He was featured prominently in Fergie's 2007 "Big Girls Don't Cry" music video. Milo also directed a series of webisodes for American Eagle Outfitters entitled It's a Mall World, and then returned to create a series of claymation shorts entitled Winter Tales.

In addition to his acting, Milo runs the DiVide Pictures production company with partner Russ Cundiff. It is mostly a film and television production company. However, in 2009, Milo co-produced the comic book Berserker, which his company adapted from a screenplay written by ex-Friday Night Lights writer Rick Loverd. 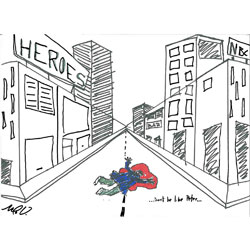 Milo Ventimiglia drew this picture of his character in order to raise money for the Pediatric Epilepsy Project.
Retrieved from "https://heroeswiki.ddns.net/index.php?title=Milo_Ventimiglia&oldid=90605"
Categories: