Alice Shaw is the long thought dead, younger sister of Angela Petrelli. After spending almost fifty years alone in a desert, Alice was briefly reunited with her family before once again disappearing. Alice is an evolved human with the ability to manipulate the weather to her will.

After hiding out in a cathedral, Angela awakens from a dream and tells Peter that she needs help from her sister. At the mention of his aunt, Peter shows a face of surprise.

In 1961, the Shaw sisters are taken to Coyote Sands, a concentration camp for evolved humans. Alice does not want to be there, but Angela cheers her up, saying that it will be just like summer camp. The two meet Charles Deveaux, Bobby Bishop, and Daniel Linderman. The boys become friends with Angela, and Alice overhears the four talking about a doctor at the camp. Angela quickly covers what they were discussing up and rushes Alice back to bed. However, Alice reveals to Angela that she believes she can control the weather. To prove this, Alice makes it snow. Later, Angela attempts to sneak out of the camp with the boys. Excited, Alice wishes to tag along, however, agrees to stay back after being told Angela had a special dream. Unfortunately for Alice, that night, Chandra Suresh comes for and, after several tests, Alice loses control over her abilities and subsequently causes the slaughter of every single resident, including her mother and father. 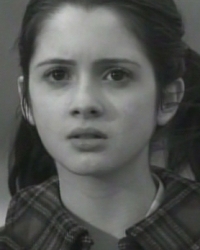 In the present, Angela tells Peter that everyone at Coyote Sands died, Alice included. She later states that she has been dreaming about Alice; alive. She then states that the dreams are confusing, and it could mean something else. A sandstorm later strikes where Angela and Claire are, and Angela believes it to have been caused by Alice. Running outside to find her sister, Angela vanishes in the storm.

Angela awakens in a dark storeroom and finds herself in a military bunker, where it appears someone has been living for some time. Alice arrives and the two sisters reunite, but things take a turn for the worst when Angela tells Alice that her dream in 1961 of Alice remaining safely at Coyote Sands was a lie. Alice becomes angry and, face contorting with rage, creates another storm, this time electrocuting Mohinder, momentarily stunning him unconscious. With Alice about to attack Peter, Angela points out that Peter is her son, making him nephew to Alice. Angela stresses that Alice now has a family and that she needs to come home with her. Dismissing this, Alice disappears into the storm after saying that she will not say goodbye. Angela becomes distraught at the thought of not seeing her sister ever again.

When Tracy Strauss meets Angela at the Burnt Toast Café, she tells her that she should be more sympathetic to her cause. She tells her to think about what would have happened if Alice had a similar facility at Coyote Sands.

After a weather changing event occurs at the TMI, Angela, Bob, Charles, Arthur and Kaito discuss the event. Angela mentions to Bob that he should be more wary as he himself has witnessed first hand how someone, referring to Alice, with the ability to change the weather, can cause utter chaos.

On January 7, 2012, Claire boards the Highland Dream under the alias "Alice Shaw". Alice is still missing by this time.

Alice has the ability to affect weather conditions for miles around her location and can target specific weather effects, such as lightning strikes, in her immediate vicinity. She has stopped rain showers, caused snow to fall in the desert, created violent sandstorms, and created severe thunderstorms. She can aim lightning from her thunderstorms at targets of her choice. Alice's ability seems to manifest unintentionally depending on her mood. Both sandstorms and thunderstorms have formed in response to her feelings of rage and fear. She notes that when she was once angry at her father, a hailstorm demolished his car. She may also have the ability to levitate using the wind, as evidenced when Angela follows her up a flight of a stairs and into a large clearing, yet she is no where to be seen. (1961)

Please refer to Theory:Alice Shaw for fan-created theories and other speculation.