Benjamin Washington, also known as "Knox", was a criminal who was among the escapees from Level 5, and was eventually recruited into Pinehearst Company. He was an evolved human with the ability to feed off people's fear and turn it into his own incredible strength.

While in Noah Bennet's house, Sylar, while stalking and hunting Claire throughout the house, finds a collection of evolved human files in one of Noah's boxes, one of which is on Knox. Sylar remarks the files are a "shopping list" of new abilities, and intends to take Knox's ability, as well as those of the other prisoners.

While in his cell, Knox, kept in a straitjacket, paces back and forth repeatedly.

When Sylar does arrive, Elle Bishop ends the battle by unleashing a massive discharge that blows out Level 5's power grid, releasing a dozen prisoners. Knox gathers some together, including Jesse Murphy (inhabited by Peter Petrelli), Eric Doyle, Flint and the German, and leads them to escape Primatech Research.

Much later, the group has arrived at a gas station, where Knox and the others take their time murdering the other tenants. Knox stops Peter from calling Nathan and directs him to the car the German secures for them. Knox then convinces "Jesse" to come with them and escape, as sirens approach.

Knox arrives at the First Federal Bank of New York in Poughkeepsie with the German, Flint, and Jesse, whose body is still inhabited by Peter. As they are entering, Knox questions Peter about feeling scared. After the heist, the other Level Five escapees ask why the police have arrived. Knox says he called the police because it's not just about the money. The German threatens Knox, but Knox senses his fear and punches his hand through the German, killing him and severely denting the metal wall behind him. Later, Knox is sitting and watching the police gather outside, waiting for the Company to arrive. When Peter asks what they are waiting for, Knox replies the reason they broke out was to exact revenge on the man in the horn-rimmed glasses. Knox perceives that Jesse is not himself when he uses his knowledge of Jesse's past life to trick Peter.

Later on, when Noah enters the bank, the hostages are released and Knox sits Noah down. He confronts him about being locked in Level 5 and says that its his turn to punish him. Peter then screams, sending Knox flying. After Future Peter's visit, Jesse (now freed from Peter dwelling within him) assists Knox in subduing Noah. They are stopped by Sylar, who telekinetically grabs Knox mid-punch. After Noah exits the bank with Flint, Knox runs away because he sees that Sylar is staying with ill-intent.

At a diner, Knox meets Jesse Murphy and is amazed with his ability. Some gangsters get into the place and Jesse uses his ability once again to scare them, as Knox feeds himself from their fear and gains strength. He quickly defeats them using his ability and causes a bloodbath. Both get confident of themselves and feel they're on top of the world, but suddenly Noah Bennet appears with the Haitian and they capture them easily, locking them out in Level 5, where Knox warns that he won't rest until taking revenge and seeing the man with the glasses dead.

Knox gets hired for Pinehearst by Daphne. He gets assigned to capture Adam Monroe and recruit Hiro Nakamura.

Knox follows Daphne to New York City and Matt Parkman's apartment, assigned to make sure she carries out her mission to kill Matt. When she refuses, Knox bursts in and seemingly uses her fear to enhance his strength and break her neck. Matt temporarily paralyzes Knox using telepathy but Knox enhances his strength further by absorbing Matt's fear and puts his fist through Matt's chest. After he leaves, this is revealed as an illusion that Matt projected into Knox's mind from the next room. It appears that Knox and Daphne staged the entire scene, since it is later revealed Daphne's true assignment was to convince Matt she was joining his side.

Knox and Flint go to Peter's apartment to capture Claire. She confronts them while Peter escapes down a fire escape, and Knox seems puzzled at her lack of fear. When she throws herself out a window and she and Peter escape into the sewers, Knox and his partner pursue. Knox easily captures Claire but Peter returns and taunts Flint into unwittingly igniting a gas leak. Knox realizes too late that it's a trap. Later, Knox returns to Pinehearst to watch Arthur sketch the eclipse.

Knox and Flint are seen patrolling the halls of Pinehearst.

Knox accompanies Flint to Mohinder's Pinehearst laboratory. They find Peter preparing to destroy the formula and find common cause: they want to make sure no one else can gain abilities and threaten their unique status. Knox goes to see Nathan and keep him prisoner until the formula is destroyed. Nathan attacks Knox and tries to incapacitate him, but Knox gains the upper hand. As Knox is about to kill Nathan, Tracy intervenes and kills him with her ability.

Eighteen months ago, Knox and Matt Parkman are eating together. Matt is trying to convince Knox to leave a gang he is running with, headed by a thug named Bartell. They part ways, and the venue flashes back to a room where the gang thugs are planning a job and selecting guns. Knox mentions he wants to "sit this one out", but Bartell doesn't comply. While Bartell is doing a confidence check on each other member (by holding a gun to their throats), Knox begins to sense their fear, and surprisingly bends a steel crowbar into a pretzel. No other gang thug asks to skip out on the heist, and Knox reluctantly agrees to participate

Knox is standing in an alley, trying to bend a piece of rebar steel with no success. Matt Parkman walks by, and sees Knox and stops to talk. Matt tells Knox he knows about the heist the gang just did, and again tries to get Knox to leave the gang. They argue about leaving gang life, and unknownbest to Knox, Bartell's gang overhear the entire conversation.

Bartell confronts Knox about talking to cop, begins to punch him, and then threatens him with a gun. He prepares to beat Knox with a baseball bat, but Knox, empowered by the fear of the other gang members breaks the bat in half, and proceeds to throw Bartell around, before punching a hole through his chest. One of the gang members, in shock, tells him that he killed Bartell, and Knox answers by saying that he is the boss now.

During routine traffic, Knox drives up in a van to speak with Matt. He thanks him for his advice, telling him he isn't a scared kid anymore. Matt asks what he did to Bartell, but Knox merely replies that he heard he got eaten by a shark. Knox drives away with his gang.

Despite him being killed and Nathan having witnessed his death, Knox still appeared on Nathan's gallery of targets.

The Company has an Assignment Tracker 2.0 profile on Knox (file: C005; password: BWygq63a) at primatechpaper.com. His personal history reads: 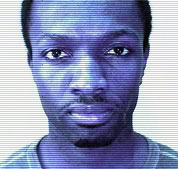 Washington was born in Watts, Los Angeles, and appears to have spent his childhood in the informal care of people other than his natural parents. Sometime during his early adolescence, he became a de facto ward of a Los Angeles street gang. Sources suggest that Washington may have worked for a number of years as a key soldier for a notorious southern Californian syndicate crime figure.

[Sentences Omitted: Classified] This intelligence suggests that Matt Parkman may have been a long-standing auxiliary parent figure for Washington, possibly in the context of Parkman's service as a parole officer.

The decision to terminate surveillance early and apprehend Washington was made as a result of a high-profile altercation at a Los Angeles diner, during which Washington murdered a number of local gang members in public using his ability. Washington was interred in Level 5 with his accomplice, Jesse Murphy, but both escaped during a system-wide security failure. He remains at large. [Sentences Omitted: classified]

The subject displays marked psychological deference toward authority figures, primarily as a result of an adolescence spent in the highly structured hierarchy of organized crime.

However, the manifestation of his ability appears to have caused significant cognitive dissonance after authority figures proved incapable of accepting the subject or countering his will. As a result, the subject developed inappropriate coping strategies, primarily repression, resulting in passivity, mood swings and chronic anger. Preliminary examination conducted during his interment in Level 5 may also indicate symptoms of early schizophrenia. All contact with the subject should be recorded and analyzed for signs of additional psychological degradation. 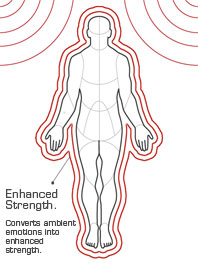 Knox had the ability to feed off of a person's fear, turning it into his own extraordinary strength. Knox apparently was able to sense the fear around him either by smell, or possibly even through a form of intuitive perception. He had also shown the ability to identify who around him is producing the fear on more then one occasion. His assignment tracker profile lists his ability as enhanced strength.

- Knox (to Adam Monroe) (Dying of the Light)

"Your fear is making me strong, girl!"

Please refer to Theory:Knox for fan-created theories and other speculation.