In Africa, Hiro tells Ando he won’t go back in time to figure out how to defeat the villains, despite the fact the world itself is at stake. Usutu says Hiro must choose his own path, or have it chosen for him.

Mohinder threatens Tracy and Nathan, and Tracy summons her freezing power. Mohinder pleads for one more sample so he can relieve Maya of her power. When they refuse, he leaps over them, rips Maya from her cocoon, and leaves through the skylight.

Peter is sedated and remembering how Nathan told him their father died, and then how he found Arthur alive and drained his powers. He wakes up to find himself handcuffed to a lab table at Pinehearst with Arthur waiting for him. Arthur explains Peter’s powers are gone forever and he’s working for the greater good. Peter says he’s seen the future and Arthur wants him to help so they can prevent that future. Peter insists that he’ll stop Arthur, who tells him he’s grounded. 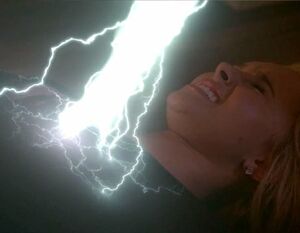 Elle gets Claire to the floor and zaps her.

Claire and Sandra return home and Sandra tries to support Claire, noting she’s proud of how her daughter is handling all of their situations. As they get out of the car, the lights flicker and they go inside to find Lyle unconscious on the floor. Recovering consciousness, he says the “bitch is back", and Claire finds Elle sitting at the computer, browsing Pinehearst's website, with electrical arcs spreading from her body. Claire tells her to get out and Elle tries to stop her by electrifying her but has no success as Claire regenerates the damage instantly. Claire prepares to toss her out and Elle judo throws her to the ground, but Lyle throws a bucket of water on her, short circuiting her powers. Elle apologizes, saying she needs help and she has nowhere else to go.

At Pinehearst, Mohinder considers the unconscious Maya, who is contained in a laboratory. Arthur introduces himself and notes he took deliberate efforts to make sure everyone believed him dead. Mohinder insists he’d do anything to keep his promise and cure Maya of her abilities. Arthur goes in, touches her, and drains her abilities into himself. Arthur looks up, his eyes briefly black before reverting to normal. Mohinder goes into the lab but Maya tells him to stay away. Outside, Mohinder asks if Arthur can take away his abilities, and Arthur wonders if he wants them removed. Arthur then takes him into the lab and shows him the two halves of the formula, and they need Mohinder to take it to the next step. Mohinder is suspicious of their agenda but Arthur tells him to leave if he doesn’t trust them. Mohinder considers it... and then asks for test subjects.

Angela is dreaming of Level 5 and appears in Sylar's mind as he lies in the coma where Peter put him. Sylar insists he belongs there and notes the cell is blocking his abilities, but Angela points out she couldn’t be there if there were the case. She says he doesn’t know what he’s capable of, tells him to rescue Peter, and says for him to make her proud. He concentrates and frees himself from his bonds and breaks the cell door open, then says goodbye to his comatose mother, promising to save Peter.

Elle continues to give off random electricity and explains that she can’t eat or sleep. She tells Claire that Daphne contacted her and said that Pinehearst could help her with her condition, but Elle believes Noah has always known what’s been going on so she came to his house. Claire wonders if they can fix any condition and worries that she may soon stop feeling anything. Elle is less than sympathetic but Claire says they should go together. Elle agrees.

Daphne checks in with Arthur who wants to know why she hasn’t recruited Matt. They wonder if she was thinking something that might discourage Matt from joining. Knox picks up on her fear and she asks how she can fix it. Arthur tells her to kill Matt, much to Maury’s outrage. Maury says he’s promised his loyalty in return for Matt’s safety. When he tries to interfere, Arthur casually snaps his neck using telekinesis, and Daphne insists there must be another way.

Claire prepares to leave and Sandra wants to call Noah. Claire asks that she keep it a secret and Sandra agrees, telling Claire to toss a glass of water on Elle if she’s get out of hand. 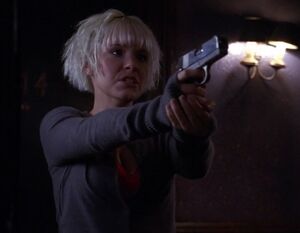 Matt tries to get hold of Mohinder from his apartment and opens the door to find Daphne pointing a gun at him. She explains that her employers think she betrayed them and she has to kill him to prove herself. He dares her to shoot but she tells him to turn around. Matt describes their future together, Daphne considers his words… and drops the gun. She apologizes to him and he reads her mind, learning that Arthur killed his father.

Arthur goes to Peter’s chamber to find that he’s freed himself. Peter attacks him but Arthur easily deflects his attack with borrowed telekinesis. They re-restrain Peter and take him to Mohinder’s lab where the doctor prepares to inject him with a new version of the formula to give him powers. Peter says Mohinder warned him not to manipulate powers in the future. To prove his vision, Mohinder asks Peter what he saw of him in the future. Peter confirms that he saw Mohinder transformed into a monster, and Mohinder notes that it’s too late. As Mohinder prepares to give Peter the injection, Sylar arrives and telekinetically throws Mohinder and Dr. Livitz back and starts to free Peter. Mohinder attacks Sylar and knocks him unconscious, while Arthur arrives and tries to stop Peter, who escapes. Arthur then stops Mohinder from beating Sylar, explaining the latter is his son and he’s been waiting a long time to be reunited with him.

Nathan and Tracy consider Mohinder’s cocooned victims and wonder if they can be freed. Mark Spatney reaches out for Tracy, but Meredith and Noah arrive and Noah tasers Spatney unconscious. Meanwhile, Elle and Claire are flying to Pinehearst in New Jersey. Claire wants to hunt down villains and Elle says she has it better off. When Claire reminds Elle that she was responsible for the Level 5 escape, Elle starts to panic, releasing electricity and interfering with the electrical systems. Claire offers her hand to ground the electricity and working together, they keep the plane from crashing.

Daphne is telling Matt what happened and warns they’ll be coming from him. Knox is outside and senses their fear, and breaks in. Daphne tries to run and Knox clotheslines her, audibly breaking her neck. Matt immobilizes Knox and then digs inside his head to find his worst fear. Knox notes that Matt is the one who’s afraid and further enhances his strength, putting his fist through Matt’s chest. Knox considers their bodies and leaves… and the entire mental illusion disappears. Daphne says that they should run but Matt insists on fighting them. Daphne warns it won’t bring Maury back but Matt insists he’s a cop and he deals with lawbreakers like Knox. Daphne says he needs help and Matt suggests they go to Primatech. 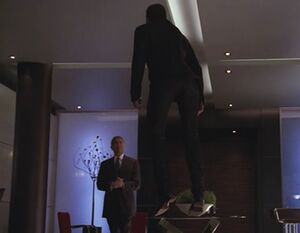 Flint seals the building but a captive Sylar warns that Peter has escaped. Arthur doesn’t believe him and says that Angela isn’t what he thinks he is. Arthur says that Angela sent Sylar to rescue her favorite son, Peter, and she’s using Sylar as a disposable weapon. He explains that Angela had a dream when he was born, a dream so terrifying that she tried to kill Sylar. Arthur claims he saved Sylar from drowning and frees him, then offers him his hand.

Peter is still in the building and trying to make his way to the lobby. Mohinder arrives but doesn’t see him, and then goes to confront Maya who is preparing to leave. She warns him to stay away, saying she can never trust him again. Mohinder says his feelings were real but she says what he did in her name was wrong. She plans to make amends for what she has done, and tells him to do the same.

Claire and Elle arrive at Pinehearst and Elle starts discharging electricity again. Elle thanks Claire for taking care of her despite how unpleasantly she treated her. Meanwhile, Peter finds Sylar, who says that Arthur told him the truth. Peter warns that Arthur can’t be trusted but Arthur arrives and says they can change the future that Peter saw. Sylar says that he’s not going anywhere, but Peter is… and telekinetically pushes his brother out the window where he falls seven stories to the sidewalk in front of Claire and Elle. Elle notes that Peter isn’t healing and he explains that Arthur took his ability. Claire tries to get him to the car but Elle insists on going inside so she can get her malfunctioning power removed. As Claire gets Peter away, they both wonder how he survived the fall.

The Company is removing Mohinder’s victims from his lab while Nathan admits that Mohinder injected them with a tranquilizer. Noah wants them to come in to the Company for testing. Nathan takes a call while Meredith warns Tracy to watch out for Nathan. Tracy says they’re not together but Meredith is skeptical. The call is from Claire.

Sylar warns Arthur that Peter won’t give up and Arthur agrees, and then wonders how Peter survived the fall. Sylar claims ignorance and Arthur receives a call… from Daphne. She says she’s convinced Matt she’s on his side. Arthur warns that if she screws it up, he’ll put her back where he found her. 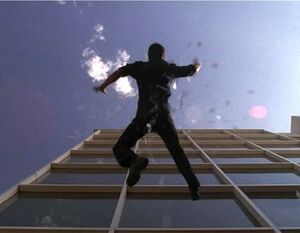 Peter falls from a great height, but is barely injured.

Claire is tending to Peter’s wounds, and he wonders if Sylar covertly broke his fall using telekinesis to maintain his cover as a villain. Nathan and Tracy arrive and Peter explains that he isn’t healing because Arthur took his powers. Nathan is skeptical since he was there at their father’s death, but Peter insists that they have to stop their father before he kills them all. Nathan insists on seeing Arthur against Peter’s advice and Claire gives him the location of Pinehearst. Tracy recognizes the company’s name. Nathan finally agrees with Peter and goes to call the Justice Department to shut the company down. Once Nathan leaves with Tracy, she notes that Nathan plans on going there anyway. He wonders how she knows about Pinehearst and she says that she takes a consulting fee from them and can get them in. Nathan insists that he plans on going there and busting down a few doors.

Usutu is making his precognitive food and explains it is a family recipe that has existed for thousands of years and is used for spirit walking. Hiro is still reluctant to travel back in time but wants to find a way to determine his enemy’s weaknesses. Usutu offers him some of the precognitive food and Hiro unwittingly eats it. Usutu then explains that one goes on a spirit walk by eating the food. Hiro’s eyes turn white and he collapses, and Usutu admits to Ando that he tricked Hiro to force him to accept his destiny.

"Show them all why you're my favorite. Make mommy proud."

"Son... until you change that attitude... you're grounded!"

"What could possibly drive a father to put his children through such grief?"

"Have you ever met their mother?"

"We remind all passengers to keep all electronics off during the flight."

"I think he's talking about you."