In the episode 20 transcript released today, it's clear that while Future Hiro is slicing and dicing the guards on the ground floor, Peter enters an elevator, throws out the guard inside and then steps out of it. If you watch the clip closely, all they show you is Peter heading toward the wall (back of the elevator shaft), the guard flying out of the elevator and then Peter stepping out. I know it doesn't say he phased in the script, but if it walks and quacks like a duck...--MiamiVolts (talk) 17:06, 8 May 2007 (EDT)

No doubt about it, after rewatching the last showdown scene, and comparing Peter's hands to both Meredith Gordon's (earlier in the mid-season) and Spragues a few epis ago doing his Nuclear tricks....Peter used Pyro just like Meredith does. --HiroDynoSlayer (talk) 05/1/2007 22:43 (EST)

I'm having a little trouble understanding what the matrix trilogy has to do with this battle scene. A coat and and a angry demeanor are hardly proof that this was a matrix refrence. Joeysousa 15:43, 2 May 2007 (EDT) 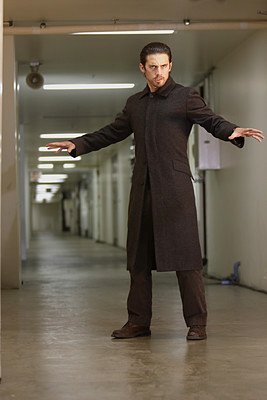 The first thing I thought when I saw Future Peter in action was Cleric John Preston. He may have have Matrix abilities, but the look was Equilibrium(Although people can and will say it ripped off The Matrix). Raven6247 16:56, 19 September 2007 (EDT)

As seen in "Walls". Future Peter is exposed to many many special people when he and Hiro raid the prison. Future Peter mah have thousands of abilities now.--ASEO 16:24, 2 May 2007 (EDT)

When Peter is running toward the door where Mohindy and Future Hiro are near the end of Five Years Gone, he slams a guard into the wall at what looks like slightly faster speed than normal (there's even a small lag just before it happens to switch from normal-mo to slightly faster-mo). I wasn't going to post anything about it, but I read Walls, and it appears that Peter has met a Super-Speedy hero in the past. Just a thought, I may be wrong. --Puff0rx

When did Peter use Enhanced Strength in Five Years Gone? I mean, he obviously used it in Walls, when he tossed the door to Niki's cell aside, and it only makes sense that he would have the power, given his relationship with Niki, but I'm not sure we actually saw him use it in the episode. There are only two scenes I can think of that might justify this. The first is when, during the battle at Homeland Security Headquarters, a guard is seen flung across the screen, but Peter does not enter the shot until afterward, so we cannot know if he threw the man physically or telekinetically. The second instance is when he spins the guard into the wall on his way to the room where Mohinder, Ando and the two Hiros are. However, everytime I watch that scene, I can't help but feel that what he did, while very cool to watch, was not beyond the ability of any physically fit human and wasn't necessarily proof of him using enhanced strength. --Joser Kyind 13:37, 3 May 2007 (EDT)

Once Hiro went back to the present (at the end of Five Years Gone) the future changed, of course. Events are different, and the Future Peter that was shown in 5YG can never and will never exist. For instance, in that alternate timeline, Peter did not meet Niki at Kirby Plaza, he met her at Moab Federal Penitentiary a year later. It would be wrong to say that events that Peter experiences in The Hard Part, Landslide, and How to Stop an Exploding Man carry through to make him become the Future Peter portrayed in Five Years Gone. -- RyanGibsonStewart (talk) 22:09, 4 June 2007 (EDT)

I was going to edit that Peter was exposed to Phasing by Future Sylar but all I get is futurepeterexposed surrounded by {{}}. I know Peter never used Phasing himself I just wanted to add that he was exposed to it. Along with Cryokinesis. Cause he was definitely exposed to both of them when confronted by Sylar. --Snow Leapord 12:57, 24 September 2007 (EDT)

"In the episode Five Years Gone, Peter has a clearly visible scar across his face. It is unknown why this scar exists if Peter absorbed Claire Bennet's healing ability."

Don't scars form when the skin heals around a serious injury imperfectly? He heals fast, but that doesn't mean they're some sort of template that it restores itself to. If the wound was bad enough, wouldn't his cells just regenerate imperfectly around it? --Ace ofspade 18:32, 9 December 2007 (EST)

why the hell do we assume that Peter got his pyrokinesis from meredith gordon when nobody knew she was alive, besides Claire? claire was swept away and kept secret by Mr Bennet so she couldn't have told Peter, and if peter has broken out a whole prison of evolved humans, and met many others, surely it being one of them would have been much more likely? it doesn't automatically have to be the only person we have been shown on the tv to have the ability, maybe it was simply chosen as a direct opposition to sylars already obtained ice powers.