This page is a recreation of Leonard Cushing's Assignment Tracker 2.0 file. To view the original primatechpaper.com file, go to case number C022, and enter the password LCtsn45p. 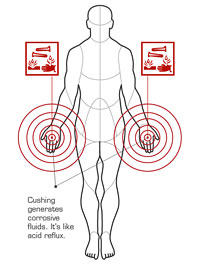 65%
Cushing was born in Mesa, Arizona, where he was raised by his father. He is not known to have any living siblings. Deviant behaviors noted throughout school records; most incidents may be attributed to lack of stable home life, and early discovery of ability.

As a teenager, Cushing made a name for himself by melting gold ore from rock in local mining towns. Company placed him on investigatory surveillance. After requisite observation period, Cushing was determined to possess the ability of secreting a highly potent acid from the pores of his epidermis.

After a prolonged and difficult recruiting process, Cushing was stationed in Las Vegas for 6 years, and tasked with shadowing persons of interest. Placement with long-term partner difficult due to Cushing's habit of dropping off the grid for months at a time. In 2007, Cushing was effectively paired with Thompson Jr.

Cushing's body was found deceased under highly suspicious circumstances. The matter remains classified as "Under Investigation." Though a formal investigation into the circumstances of his death is pending, Cushing is also suspected of traitorous activities, and may be responsible for the recent unsolved murder of five agents.

Cushing is classified as highly unstable. Often utilizes abilities in unpredictable and inappropriate manner. From childhood, overcharged, untrained emotions may impact control index of unique ability. In latest assessment, partner Thompson Jr. has proven to be a stabling influence on Cushing's performance and responsibility. In light of difficulties in recruitment, sporadic unexplained disappearances, and reluctance to work with a partner, Cushing has been monitored closely throughout his association with the Company. All files now tagged for pending investigation.
Retrieved from "https://heroeswiki.ddns.net/index.php?title=Assignment_Tracker_2.0/Leonard_Cushing&oldid=17705"
Category: