This page is a recreation of Brendan Lewis's Assignment Tracker 2.0 file. To view the original primatechpaper.com file, go to case number C020, and enter the password BLjtd19f. 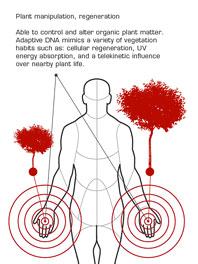 75%
Brendan Lewis grew up in Saratoga Springs. While a teenager, he discovered that he could slightly manipulate plants to grow faster. Soon after manifesting, he was bagged and tagged by Thompson Sr., then released back into society. Lewis spent the next two years attempting to evade surveillance. During that time, Lewis's ability developed to the point where he would manipulate medium-sized plants and roots. Tissue samples revealed that he also experienced increased healing. Thompson was able to recover Lewis outside of Boulder, Colorado. Lewis spent a year in a Company lab as extensive study was made of the limits of his powers. While being moved from a Level 2 to a Level 3 holding cell, Lewis was able to escape (see PXIR-9961 for incident analysis). At the time, Lewis was not considered a priority threat. Eventually, Lewis was sighted in Palmer, West Virginia, leading to his recovery by Agents Dunlap and Thompson in the nearby ghost town of Silver River.

The subject exhibits moderate passive-aggressive tendencies, as well as early indicators for paranoid schizophrenia, the latter possibly exacerbated by his species transition and by the fact that he really is being followed by people who intend to conduct experiments upon him. Communication patterns continue to evolve as his primary social focus shifts to the plant life around him, but all recent interaction with the Company suggests all classic comorbid conditions, including clinical depression and anxiety. Allowed to persist in the wild, the subject would likely experience a high degree of social dysfunction such as long-term unemployment, homelessness and possibly suicide.
Retrieved from "https://heroeswiki.ddns.net/index.php?title=Assignment_Tracker_2.0/Brendan_Lewis&oldid=17642"
Category: