This page is a recreation of The German's Assignment Tracker 2.0 file. To view the original primatechpaper.com file, go to case number C014, and enter the password TGmgx14r. 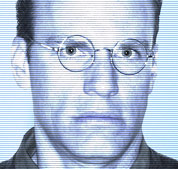 The Company first learned about the subject after major law enforcement organizations across Europe and the United States linked a rash of unusual bank robberies to a single individual. The suspect--known only as "the German" due to witness accounts of his accent--apparently used extreme force to penetrate physical security measures, tearing bank vault doors in half and blasting holes through reinforced steel walls. Yet law enforcement agencies were unable to find any chemical or physical evidence of explosives or tools.

As a result of the subject's initial counter-strategy upon regaining consciousness after retrieval--see CSIR-0704 for facilities impact report--the subject has been maintained under Class IV sedation while additional measures are implemented to facilitate further communication. [Sentence Omitted: Classified] Pre-operational analysis indicated that the subject inflicted bodily and extraneous property damage only when necessary to achieve primary objectives--generally large-scale theft--but new intelligence gained during the subject retrieval suggests significant potential for improvement in the initial psychological profile. Additional psychoanalysis is expected to reveal highly sociopathic instincts, apparently projected in close psychological association with the subject's posthuman ability.
Retrieved from "https://heroeswiki.ddns.net/index.php?title=Assignment_Tracker_2.0/The_German&oldid=17776"
Category: