Molly Walker was a young woman from Los Angeles whose parents were brutally murdered by Sylar when Molly was a young girl. Molly was taken into custody by The Company, and was later taken into the care of Matt Parkman and Mohinder Suresh. After being captured and used by Renautas to locate countless evolved humans, she decided to make sure her power would never be exploited again. She was an evolved human with the ability to locate anyone in the world.

For an episode-by-episode summary, see Molly Walker: Season One History.

Audrey Hanson and Elisa Thayer discuss Molly's probable abduction after the murder of her parents by Sylar, but Matt Parkman uses his powers to locate her hiding in a hidden room in her home. As Matt later goes to see Molly to read her mind, they find the safe room where she was being held empty, and a mysterious man believed to be Sylar dragging her off. He lets her go when confronted and Matt comforts her. 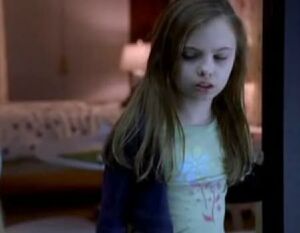 Now in the custody of the Company, Mohinder is told that Molly has the same medical condition that killed his sister Shanti, which prevents her using her powers. Mohinder treats Molly with antibodies from his own blood, realizing this is the cure. Molly shows that she is healed by locating Matt Parkman on a map. Mohinder tells Molly to hide as Matt and Mr. Bennet enter the room, Mohinder knocking Matt out and Bennet training his gun on Molly, creating a standoff.

Matt wakes up, and Molly identifies him to Mohinder as the man who promised to keep her safe, causing everyone to lower their guns. Later, she explains how her power works, and when mentioned, she refers to Sylar as "the boogeyman". She then locates Sylar, giving his location as Isaac's loft. Later, Matt, who went to find Sylar, calls Mohinder to warn him that Sylar may be on his way, though Molly, using her power, says "he's already here." The two escape the building with the help of Niki, D.L. and Micah and in Kirby Plaza, they all witness the bout between Sylar and Peter Petrelli. As paramedics take the wounded Matt away on a stretcher, Molly runs up and asks him not to die, that says that he is her hero.

Molly, now living with Matt and Mohinder, is asked by Matt about drawings that her teacher had shown him. She refuses to talk about it, and that night has a terrible dream. Matt hears her and reads her mind and hears her screaming, as well as a man's voice saying "I can see you". Matt asks her to locate his father, and Molly panics and reveals that Mr. Parkman is the person who can see her when she looks for him, then collapses in shock. Mohinder delivers her to the Company, thinking it would be better for her there. 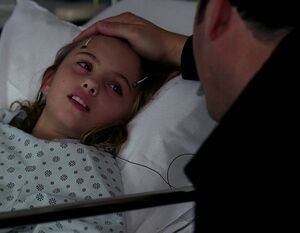 Matt brings Molly out of her coma.

While in the care of the Company, Molly still experiences her dreams while in a coma. Mohinder tells Bob that he's leaving the Company with Molly, but she is still in a coma, and not ready to leave. Matt apologizes to Molly for making her look for his father, and uses his ability to go inside Molly's mind, where he finds Molly. He summons Maury, and leaves him trapped in his childhood home, escaping with Molly. He assures her that Maury won't hurt her again.

Molly lies in Mohinder's apartment, asleep, while Sylar strokes her hair, who tells Mohinder over the phone that he and Maya needs his help. When Mohinder returns, Maya is provoked by Sylar into using her ability, and Molly begins to succumb to its effects, forcing Maya to stop. After traveling to Mohinder's lab, Molly is kept with Maya, where she offers to use her ability to find Alejandro. When she tries, however, she finds that "he isn't anywhere". Maya confronts Sylar about this, and is promptly shot dead, causing Molly to scream with fright and run to Mohinder's side. Molly remains beside Maya until Mohinder uses the regenerative blood he collected to bring her back to life. Mohinder then protects Molly from the crossfire between the brief battle between Sylar and Elle Bishop.

Mohinder Suresh has sent Molly to live in Chennai, India with his mother. Molly enjoys India, finally having a home and friends. She feels like she has put the past behind her until she is contacted by Micah Sanders to help Rebel rescue Monica Dawson from Danko's team. Molly uses her ability to find Monica and goes with Rebel to Pittsburg. They rescue Lee and Claude, but could not find Monica. She tries to locate Monica again and gets worried because she sees that Sylar is close to Monica. Micah leaves Molly to find Monica and she realizes that Micah was just using her to find his cousin, which angers her. Molly decides to leave with Claude after Micah apologized.

Mohinder goes to see Molly when his girlfriend Mira Shenoy goes missing. He asks Molly to find her and Molly uses her clairvoyance to locate her. She sees Mira in her office, being attacked by a man. Molly tells Mohinder what is happening and tells him to go.

Molly described her power as the ability to "find people". She had presumably been asked by the Company to find other evolved humans. The full extent of her power and what it could locate, beyond people, has not been revealed. At one point, she tries to locate the Hiro Nakamura from the future, but instead locates Tommy Clark as he has Hiro's powers as explained by Hiro.

Please refer to Theory:Molly Walker for fan-created theories and other speculation.